Neetu Kapoor shared a selfie, also featuring Rishi Kapoor and Randhir Kapoor, and wrote: "Their conversation is only food though." 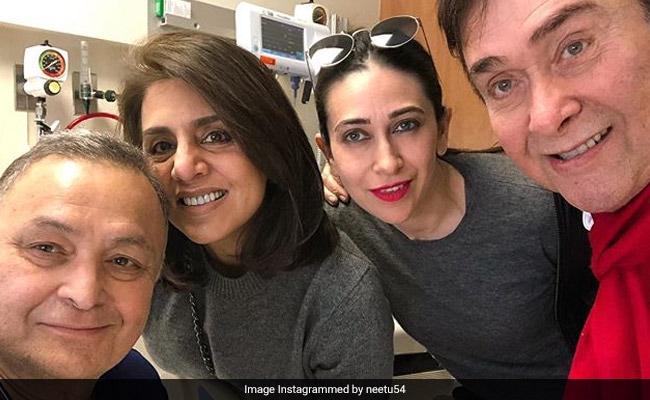 Oh, hello there, Rishi Kapoor. It's always good to see the veteran actor, who is currently in New York for treatment. Rishi Kapoor's wife Neetu shared a brand new photo of the 66-year-old actor, also starring herself, Rishi Kapoor's brother Randhir Kapoor and niece Karisma Kapoor. "The bestest brothers ever," Neetu Kapoor captioned the post and revealed something about the Kapoor brothers. Neetu Kapoor said that the Kapoor brothers are always talking about one thing - food: "Their conversation is only food though." Rishi and Neetu Kapoor's daughter Riddhima Kapoor Sahni dropped heart emojis on Neetu Kapoor's post.

Comments such as: "What has happened to him?", "Get well soon" and "How's Rishi Kapoor?" flooded the comments section. The Kapoors have been extremely guarded about Rishi Kapoor's medical condition and have squelched rumours in the past that he has been diagnosed with cancer. Take a look at Neetu Kapoor's post here.

So wonderful catching up with Chintu uncle in NY ! He looks so handsome and i always enjoy discussing food and restaurants with the Kapoor brothers #family #newyork

In the photo about which Neetu had Instagrammed earlier. "Kapoor Saab's hair all buzzed! Josh is great! Love this look," she had written.

Neetu Kapoor's "will be on the same flight back" post had fans speculating that Rishi Kapoor may touch down in Mumbai soon but a source close to the Kapoors told news agency IANS that though the Mulk actor is looking forward to his homecoming, that's not happening just yet. The source hinted that a possible wedding is on the cards for Rishi Kapoor's son Ranbir Kapoor and Alia Bhatt and that the 66-year-old actor will be back in time for the preparations: "Rishi is homesick and very eager to return home. They have a wedding to plan. And he's counting the days. But he's not ready yet to return. His treatment is slow but steady. Hopefully, he can come home in a few months. But end of this month? No way."

Rishi Kapoor has been undergoing treatment in the US from September last year.