The family visited the Eiffel Tower and Disneyland Park 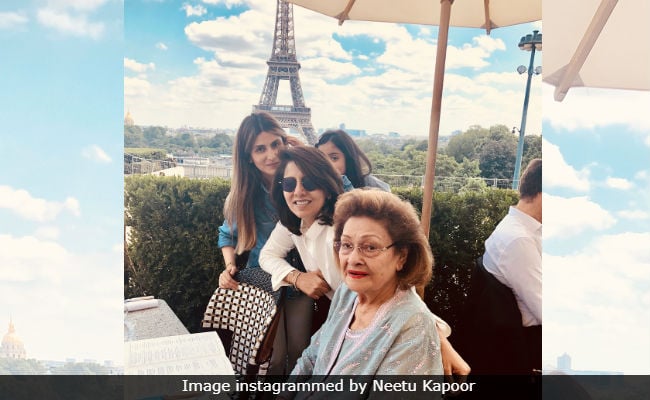 Ranbir Kapoor celebrated Neetu Kapoor's 60th birthday in Paris with the rest of the family but he gave the next day's trip to the Eiffel Tower a miss. Neetu Kapoor posted pictures from the family's trip to the iconic landmark of the city, which did not feature Ranbir Kapoor. Rishi Kapoor, Krishna Raj Kapoor, Riddhima and Samara relished a sumptuous-looking meal with Neetu at a restaurant overlooking the Eiffel Tower. "Super charged to see the Eiffel Tower," she captioned the photos. The family earlier visited the Disneyland Park - a trip, which Riddhima's husband said "had something for everyone." (PS: Ranbir Kapoor skipped this one too).

Here are recent pictures from the Kapoors' extended Paris trip:

There is a reason why Disneyland is called the happiest place on Earth. There's something for everyone #Summer2018

Neetu Kapoor kept her 60th birthday celebrations private with only her immediate family in attendance. She shared photos from the birthday dinner too:

Ranbir Kapoor is basking in the success of Sanju (a biopic on actor Sanjay Dutt), which shows no signs of stopping at the box office. The film has made over Rs 270 crore and in the process it broke several records set by films like Dangal, Baahubali: The Conclusion and this year's "Padmaavat."

Brahmstra is a trilogy and the first of the series is expected to release next year.
Comments
neetu kapoor paris tripranbir kapoor parisneetu rishi kapoor