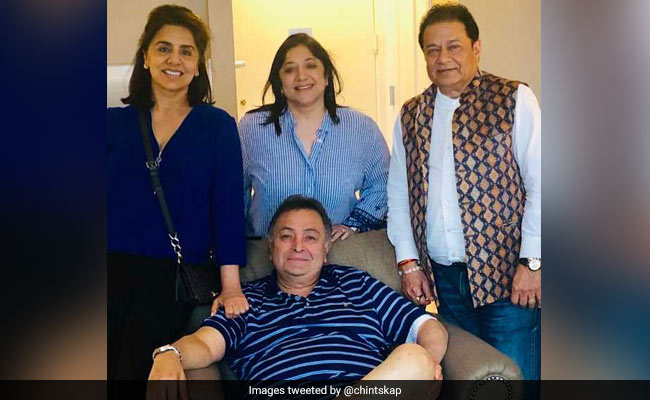 Rishi Kapoor and Neetu Kapoor, who are currently in New York for the Mulk actor's cancer treatment, frequently share pictures along with the guests who visit them, on social media. The latest addition to Rishi Kapoor and Neetu Kapoor's visitor's list is singer Anup Jalota. On Wednesday, Rishi Kapoor posted a picture from their meeting on his Twitter profile and he captioned it: "Anup Jalota and us. Thank you for coming." Anup Jalota also shared a picture from the meeting on his unverified Instagram profile and he wrote: "An evening well spent with the healthy, happy and healing family. It felt like a home away from home. Thank you Rishi Kapoor ji, Neetu ji and Radhika for a wonderful time. Rishi Kapoor Ji, can't wait to see you back on screen!"

Anup Jalota and us. Thank you for coming. pic.twitter.com/3matg7jmMs

Anup Jalota, who was one of the celebrity participants in the TV reality show Bigg Boss 12, featured in headlines for his controversial entry with his 28-year-old student Jasleen Matharu (who was said to be his girlfriend). Anup Jalota is known for singing devotional songs.

Rishi Kapoor and Neetu Kapoor moved to New York in September last year and during their stay there, they were frequently visited by their daughter Riddhima Kapoor Sahni, son Ranbir Kapoor and his rumoured girlfriend Alia Bhatt. Rishi Kapoor has now been declared cancer free. Rishi Kapoor is expected to return to India soon and he will reportedly celebrate his 67th birthday with his family in India.