Thank you Malaika and Arjun for coming," wrote Rishi Kapoor 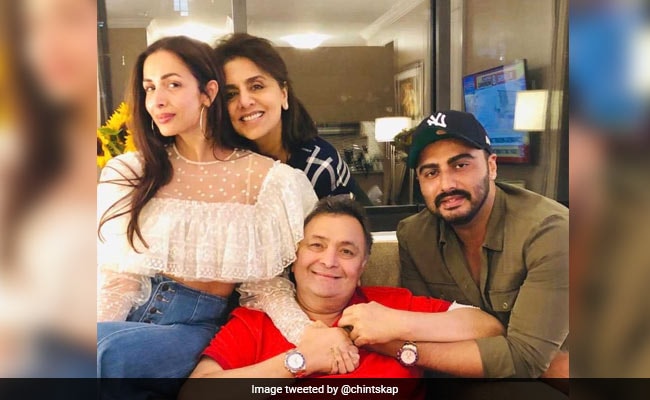 Malaika Arora and Arjun Kapoor, who are currently on a vacation in New York, managed to scoop some time from their schedules and met Rishi Kapoor and Neetu Kapoor. On Thursday evening, Rishi Kapoor shared a snippet from their meeting on his Twitter profile. In the picture, the quartet can be seen happily posing together for the camera. Rishi Kapoor, who was happy to host the couple, thanked them for dropping by. "Thank you Malaika and Arjun for coming," wrote Rishi Kapoor. The 66-year-old actor accompanied his tweet with (what we are guessing is an inside joke) and wrote: "Hope you got to see Rocketman and lunch at Red Farm."

A few minutes later, Neetu Kaploor shared the same picture on her Instagram profile and she wrote: "Fun evening with our very own ghar ka bacha Arjun and the lovely Malaika." Take a look at the post here:

Thank you Malaika and Arjun for coming. Hope you got to see "Rocketman" and lunch at "Red Farm" pic.twitter.com/CDYJja5Ebe

Malaika and Arjun have been actively sharing pictures from their New York getaway. On Thursday morning, both Malaika and Arjun shared separate pictures of themselves dressed in neon green outfits and they could be seen wearing identical caps. Malaika wrote: "Mad hatter in NCY.... (p.s The mad hatter clicked it)."

Meanwhile, Arjun shared this post on his Instagram profile and he wrote: "Yankee Doodle Do with my Fan and I. Ps - who wore the neon better?"

Malaika and Arjun made their relationship Instagram official of sorts on the actor's birthday. Malaika shared a picture in which the two of them could be seen holding hands and she captioned it: "Happy birthday my crazy, insanely funny and amazing Arjun Kapoor. Love and happiness always."

Malaika and Arjun even spent time with Arjun's uncle Sanjay Kapoor in New York, who was accompanied by his wife Maheep Kapoor and their son Jahaan. Take a look at the pictures here:

Rumours about Arjun and Malaika's relationship started doing the rounds after they attended the Lakme Fashion Week together. Malaika Arora was previously married to Arbaaz Khan, with whom she has a teenaged son. They separated in 2016 and divorced the next year.

Rishi Kapoor and Neetu Kapoor moved to New York in September last year, after the Mulk was diagnosed with cancer. During their stay in the Big Apple, the Kapoors were visited by several stars including Shah Rukh Khan, Aamir Khan, Deepika Padukone, Priyanka Chopra and Vicky Kaushal to name a few. The actor is expected to return to India soon.