"Always did love reading fiction," is what Richa tweeted 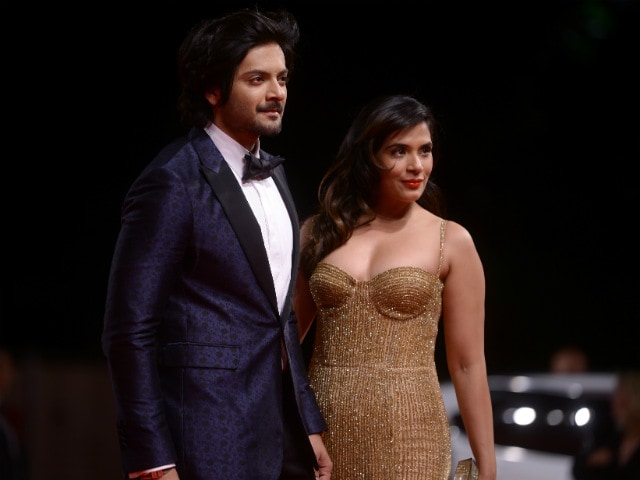 Richa Chadha, Ali Fazal at the premiere of Victoria And Abdul in Venice (courtesy AFP)

New Delhi: Richa Chadha accompanied her Fukrey co-star Ali Fazal to the premiere of Victoria And Abdul at the 74th Venice Film Festival and the Internet went berserk. A photograph of the two stars holding hands ahead of the recently held premiere is being shared on social media and has gone crazy viral already. Both Richa and Ali found their names occupying the top spot on trends' list after reports that the two have sort of confirmed their rumoured relationship with the hand-in-hand photograph from the premiere. A certain publication went one step ahead to report that Ali is actually dating someone else - a 'secret girlfriend' - something which he had reportedly confirmed before. Both Richa Chadha and Ali Fazal have taken note and dismissed the report in their own ways. "Always did love reading fiction," is what Richa tweeted sharing the article while Ali slammed it as "misogynistic."

"That's so mysogynistic. Is that how men of B town like to say it? Stashing women? Even if i did, I'd find a respectful word for it dear. Be kind," is what he had to say. Read their tweets below.

The report which Richa and Ali discarded so gracefully, includes a screenshot of what is claimed to be Ali Fazal's text reply when asked about dating Richa. "She's my best buddy not my girlfriend... I've learnt a lot from her and she is one of the few real people l here. As for my girlfriend I'm with her right now in Los Angeles," is what parts of the text reads.

Couldn't be more proud !!! @alifazal9 ! You held your own. Magnificent in the film and in a magnificent film !

Promoted
Listen to the latest songs, only on JioSaavn.com
Ali Fazal and Richa Chadha co-starred for the first time in 2013 film Fukrey and reportedly have seeing each other for a year now. Richa reportedly joined Ali a day after he arrived in Venice - if reports are to be believed, work commitments kept her busy but she did not want to miss Ali's big day anyway. Meanwhile, Fukrey 2 is on its way and will have the rumoured stars reprising their roles.