The first trailer for Judi Dench and Ali Fazal's Victoria And Abdul was unveiled on Tuesday. The film is based on Queen Victoria, British Empire's longest reigning monarch, and her attendant from India, Abdul Karim 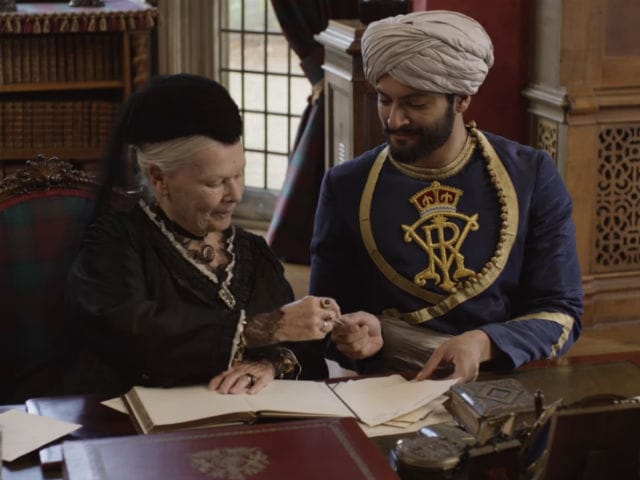 New Delhi: The first trailer for Judi Dench and Ali Fazal's Victoria And Abdul was unveiled on Tuesday. The film is based on Queen Victoria, British Empire's longest reigning monarch, and her attendant from India, Abdul Karim. Judi Dench plays Queen Elizabeth while Ali Fazal portrays the role of Abdul. The trailer of Victoria And Abdul tracks the Queen's strong friendship with Abdul, which leaves the other members of her monarch confused. Abdul teaches her Urdu, talks about India and tells her about mangoes, 'the queen of fruit.' The tagline of the film's poster reads, "An extraordinary true story of queen and her new best friend." Victoria And Abdul is directed by Stephen Frears. The film also stars Hollywood actor Michael Gambon.

Watch the trailer of Judi Dench and Ali Fazal's Victoria And Abdul.


Victoria And Abdul is Ali Fazal's first Hollywood film. Of working with the Oscar-winning actress Judi Dench, the 29-year-old actor told news agency IANS, "She was very welcoming from the beginning and we went out for a lunch where we broke the ice and she made me comfortable, the relationship began there."

"We had a lot of conversation regarding Indian films, though her perception of Bollywood was song and dance, I shared how we are much more than that. She loves our country. In fact, she was little heartbroken when she got to know that she is not coming to India; which is quite ironic because even Victoria never visited India," Ali told IANS.

Ali added that he auditioned for the role of Abdul at the last moment and was someone from the industry suggested him to give it a shot. "I wish I take the name someday, I owe it to that person, but I have to take permission for that."

Promoted
Listen to the latest songs, only on JioSaavn.com
Judi Dench and Ali Fazal's Victoria And Abdul releases in September.