Kareena Kapoor shared a screenshot of her conversation with  Rhea Kapoor 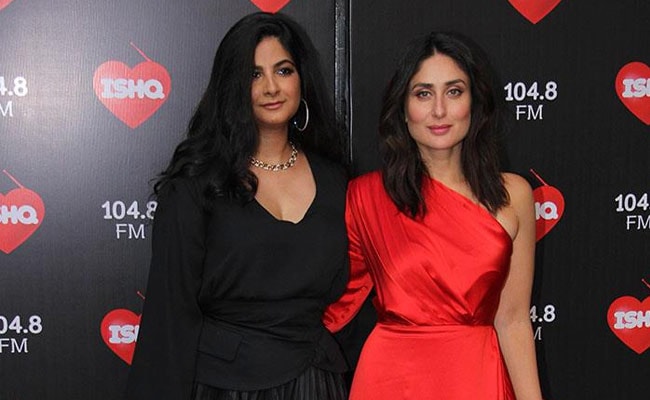 A throwback of Kareena Kapoor and Rhea Kapoor.

Kareena Kapoor Khan has a lovely band of girlfriends who stand by her through thick and thin. The group involving the likes of Rhea Kapoor, Sonam Kapoor, Masaba Gupta, Malaika Arora and Amrita Arora are often seen hanging out with each other. And, like all good friends, they also know just when to send each other love, gifts and loads of food. Well, we say this because Kareena Kapoor has let us in on a foodie conversation between herself and Rhea Kapoor. In it, Rhea Kapoor is seen asking Kareena Kapoor if she can send her some dessert and even gives her options. Tagging Rhea Kapoor and sharing a screenshot of the chat, Kareena Kapoor said, “I love these conversations,” with laughing emojis.

The screenshot starts with Rhea Kapoor asking, “Should I send you hot chocolate? Whipped cream.” To this Kareena Kapoor says, “No no, I don't like.” Rhea then continues, “Hot fudge sauce and vanilla ice cream.” Kareena Kapoor promptly replies, “Ya, that's best.”

Rhea Kapoor then adds, “You were guffing about it,” causing Kareena Kapoor to reply with “finger on the lips” emojis.  “Ok will send biscuits and hot fudge. Order vanilla ice cream.”

After reading this chat, all we want is some ice cream and a friend like Rhea Kapoor. Reacting to the post, Rhea Kapoor reshared the Instagram Stories and said, "The only way to talk to your heroine tbh (to be honest)." Kareena Kapoor and Rhea Kapoor have worked together in Veere Di Wedding. 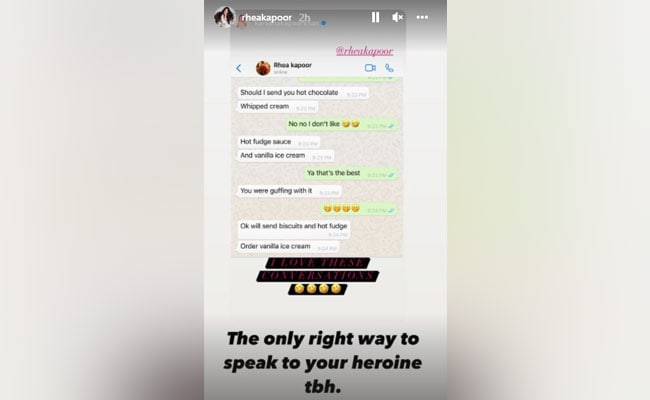 It is a well-known fact that Kareena Kapoor is a complete foodie. On the first Monday of the year, the actress threw caution to the wind and bit into a buttery croissant. Sharing the photo, Kareena Kapoor said, “It was supposed to be an eat healthy first Monday of the year and blah blah but it's a croissant so just go for it. Do what your heart desires. It's 2022. Make the most of it…”

Rhea Kapoor's talent for cooking is famous in Bollywood circles.  On Thanksgiving recently, her cousin Arjun Kapoor shared a picture of the lovely spread that Rhea Kapoor had prepared for her friends and family. From pies and slices of meat to pasta, Rhea managed to prepare a feast for the occasion.

On the work front, Kareena Kapoor will be seen next in Laal Singh Chaddha. Rhea Kapoor, meanwhile, is the daughter of Anil Kapoor and has produced films such as Aisha, Khoobsurat and Veere Di Wedding.