Inside The Kapoor Fam-Jam With Shanaya, Maheep, Rhea And Karan Boolani 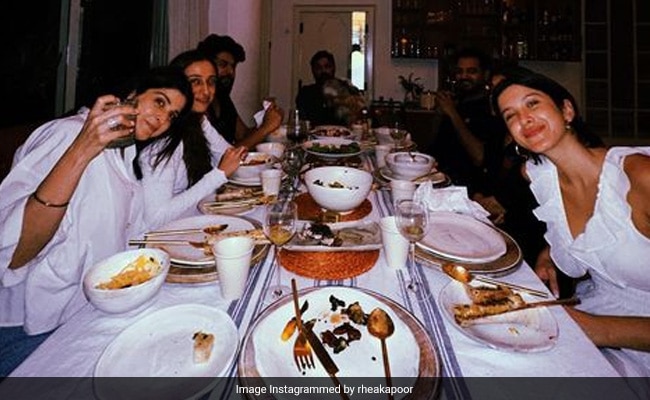 It was a fun night with the company of family and friends at Rhea Kapoor and Karan Boolani's Bandra house in Mumbai over the weekend. The couple hosted a dinner party for Rhea's aunt Maheep Kapoor and her daughter Shanaya Kapoor along with a handful of their friends, including fashion designers Arpita Mehta, Kunal Rawal and Shehla Khan. Rhea, on Sunday, shared a sneak peek into their get-together. She posted three photos featuring herself enjoying the evening with her close ones. The first image shows the amazing candlelight set-up at their dinner table. The second picture shows the guests engrossed in a conversation as host Karan Boolani plays with his pet pooch. The third image shows Maheep, Shanaya and others posing for the lens. The mother-daughter duo were twinning in white outfits.

Rhea Kapoor borrowed a quote by The Sopranos' character Carmela Soprano for her caption. She wrote: “We worry so much. Sometimes it feels like that's all we do. But in the end, it just gets washed away. All of it just... just gets washed away." Rhea Kapoor's post garnered a whole lot of love on social media. While Maheep Kapoor, Arpita Mehta and Kunal Rawal dropped red heart icons, Karan Boolani expressed his love for his home with a house, an amulet and a red heart emoji. Shanaya Kapoor used several icons featuring two hands forming a heart shape.

When not busy with work and hosting get-togethers for family and friends, Rhea Kapoor keeps herself busy with self-care routines. She has started taking good care of herself quite recently. Courtesy: Sunita Kapoor. Rhea posted a no-filter selfie and wrote, “Hi. It's me. No filter just a good skin day... decided to listen to Sunita Kapoor and attempt to take care of myself.” Rhea Kapoor's effort left her mom Sunita super “happy.” Her brother-in-law Anand Ahuja also complimented the producer in the comments section. He wrote, “Love! Looking like her also here!

On the work front, Rhea Kapoor has co-produced films such as Aisha, Khoobsurat and Veere Di Wedding, all of them starring her sister Sonam Kapoor.