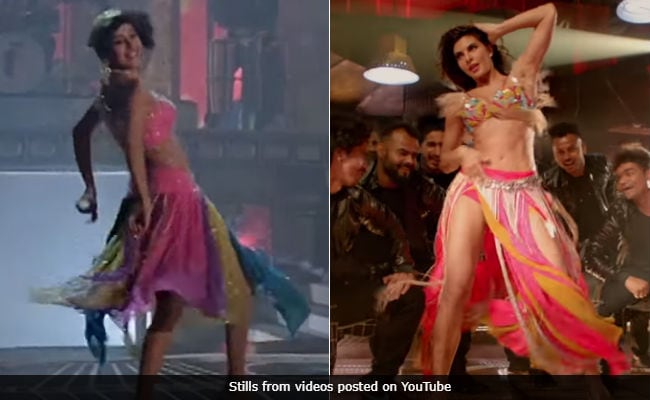 New Delhi: Actress Jacqueline Fernandez's update of iconic Nineties hit Ek Do Teen has been pilloried on several fronts, including N Chandra - director of the film the original song belonged to, Tezaab - and social media, which has been outraging over the new version ever since it released earlier this week. Actors Anil Kapoor and Salman Khan - both of whom are filming Race 3 with Jacqueline - have defended the song on Twitter. Mr Kapoor's words carry particular weight because he was the hero of Tezaab, although he didn't feature in the song - Ek Do Teen belonged to actress Madhuri Dixit, it was one of the earliest and possibly the most memorable of the many dance numbers she appeared in over her career. It's worth revisiting Madhuri's original performance to understand why Twitter is so furious and why N Chandra dismissed Jacqueline Fernandez's version, coming up in new movie Baaghi 2, as 'crass.'

Tezaab was made in 1988, a cinematic era in which Bollywood divided its cast into heroes, heroines, villains and character actors. The hero was exactly that; the heroine less so - female leads in mainstream films of the time were expected to do little else other than look pretty, dance well, and be rescued from peril by the hero. Female characters were allowed little or no agency - this was true of Madhuri's character in Tezaab, the lovely and talented daughter of a drunkard who forces her to dance in front of a crowd of men. This is the setting of Ek Do Teen, which begins with the crowd chanting Madhuri's name in the film - Mohini. But what could well have become the sort of salacious, titillating 'item numbers' that were the mainstay of Bollywood potboilers of the time turned out to be sweet rather than sexy. The credit is Madhuri's, whose grace and megawatt smile lifted the song out of the potential morass of trashy to a rare level of sublime.

Watch Madhuri Dixit dancing to Ek Do Teen in Tezaab:

Ek Do Teen was the first of many songs that Madhuri Dixit made famous - no Madhuri film was considered complete without a showcase number. And nobody could elevate the 'item number' into art as well as she could, from Humko Aaj Kal Hai Intezaar in Sailaab right upto Ghagra in Yeh Jawaani Hai Deewani.

Director N Chandra's objection to the new version of Ek Do Teen - as well as choreographer Saroj Khan's - is that Jacqueline Fernandez's routine essentially drags the song back into the gutter from where Madhuri had elevated it. The new Ek Do Teen, set in a nightclub, was released this week.

I've not seen the trashy Ek do teen till now. Let's hope I never do.

The reason why original #EkDoTeen is such an iconic song is because the woman is seen being more than an object of desire. Madhuri dances beautifully in a quirky and fun way not trying to please anyone. The newer version does the exact opposite

If were to explain Jacqueline Fernandez's remake of Madhuri Dixit's Ek Do Teen in one word: Horror.

Do not touch the legends.

Was changing channels suddenly watched Jacqueline Fernandez dancing to iconic song 'Ek Do Teen.....'. Switched off the TV as a mark of respect to Madhuri Dixit.

If you still do not appreciate the level of artistry Madhuri Dixit delivered through her dance numbers and the delicate balance she struck in the more sensual ones, I hope you'll realize it after watching the new Ek Do Teen.

So instant and so scathing was the backlash that Jacqueline's co-stars felt compelled to defend her on Twitter.

Promoted
Listen to the latest songs, only on JioSaavn.com
And while Salman's tweet was allowed to pass, Anil Kapoor has been soundly chided in the comments thread for defending the song.

The one person who is deafeningly silent is Madhuri Dixit herself - there has been no tweet, no public show of support from her. Last year, she happily appeared in a promotional video with actors Alia Bhatt and Varun Dhawan who were recreating her song Tamma Tamma from Thanedaar in their film Badrinath Ki Dulhania. But for Ek Do Teen 2.0, Madhuri isn't speaking up.