After Salman Khan, Anil Kapoor Gives Jacqueline Fernandez's Ek Do Teen An A For Effort

"What a momentous task it was to follow in Madhuri Dixit's footsteps, and Jacqueline has done it exceptionally! 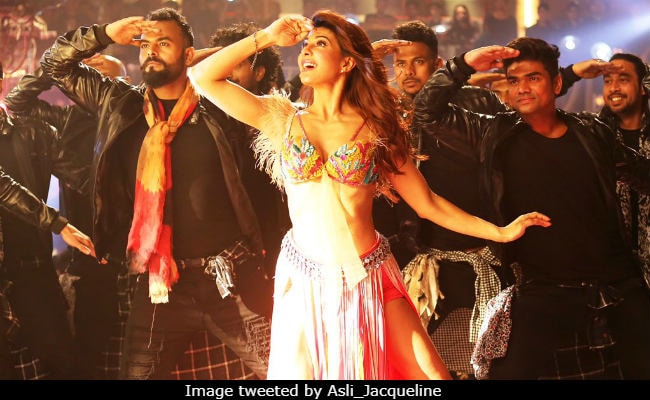 Jacqueline Fernandez from the Ek Do Teen redux (courtesy Asli_Jacqueline)

New Delhi: Tezaab director N Chandra may not have approved of Jacqueline Fernandez's redone version of the song Ek Do Teen but Tezaab actor Anil Kapoor appears to have really loved it. He reviewed the revamped Ek Do Teen, which has been recreated as a special addition for Baaghi 2 and said it takes a considerable amount of difficulty to match up to the high standards set by Madhuri Dixit (who danced in the original Ek Do Teen) but Jacqueline has indeed done a great job. "What a momentous task it was to follow in Madhuri Dixit's footsteps, and Jacqueline has done it exceptionally! It takes a lot of courage and conviction to attempt to recreate an iconic song that so many people have loved for so long! #EkDoTeen," Mr Kapoor tweeted.

Earlier this week, as Ek Do Teen continued to top the trends' list, there was considerable amount of backlash on Twitter and a sizeable amount of criticism from N Chandra, who directed the 1988 film Tezaab - Ek Do Teen originally belongs to the movie, which famously starred Anil Kapoor and Madhuri Dixit. "I can't believe they've done this to Ek Do Teen. It's crass beyond imagination," the director told IANS earlier.

Not just Anil Kapoor but Salman Khan, who has co-starred with Jacqueline in Kick, also defended his colleague in a tweet of support on Wednesday. "Loved the song, Jackie has done full justice to the legendary moves of Saroj Khan. Difficult to match Madhuri," read a part of his tweet. Salman also made a reference to Varun Dhawan's Judwaa 2, which is a recycled version of his own 1997 movie Judwaa.

N Chandra appeared to have taken particular offense to Madhuri being replaced by Jacqueline in the remixed version. This is what he told IANS: "Jacqueline Fernandez doing Madhuri Dixit's number? Give me a break! It's like turning the Central Park into a botanical garden. Madhuri danced with such grace and innocence." N Chandra, who said that remixing old iconic songs is "creative vandalism" and that there should be "strict laws" against it, was also reportedly joined by Saroj Khan in the anti-Ek Do Teen remix campaign.

Promoted
Listen to the latest songs, only on JioSaavn.com
Jacqueline Fernandez has been choreographed by Ganesh Acharya, who was one of the background dancers in the original Ek Do Teen.

Baaghi 2 will arrive in theatres on March 30.