On Wednesday, Donald Trump became the first US president in history to be impeached twice when majority of the in the House of Representatives over violence at last week's capitol riots. 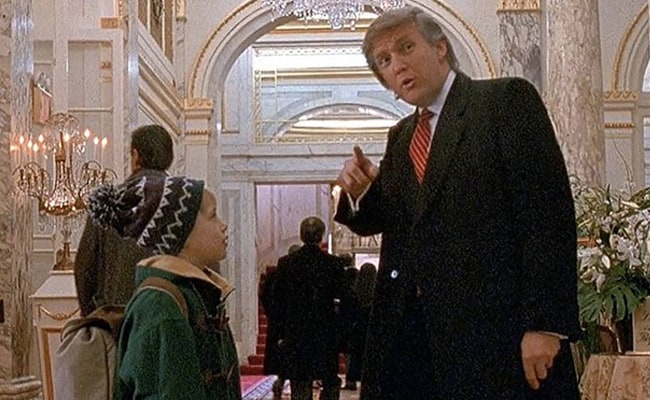 Donald Trump in a still from Home Alone 2

Actor Macaulay Culkin, star of Nineties' Home Alone movies, is "sold" on the idea, as suggested by netizens, that outgoing US president Donald Trump be removed or replaced from his cameo in Home Alone 2: Lost In New York. A chunk of the 1992 movie was filmed in New York's Plaza Hotel, which was then owned by Donald Trump. The movie featured him in a cameo, in which he gave directions to a young Kevin, played by Macaulay Culkin, to go to the hotel's lobby. "Down the hall and to the left," Trump told him in the movie. On Wednesday, Donald Trump became the first US president in history to be impeached twice when majority of the in the House of Representatives over violence at last week's capitol riots.

Soon after, Home Alone 2 featured in Twitter conversations, with users joking that Trump became the "first Home Alone 2 actor to be impeached twice" and that his cameo must be removed from the Christmas classic. Soon enough, Macaulay Culkin joined the conversation. "(A) petition to digitally replace Trump in Home Alone 2 with 40-year-old Macaulay Culkin," tweeted a user, to which Macaulay Culkin replied: "Sold." Applauding efforts of another fan, who edited out Trump from the cameo in a clip, the actor said: "Bravo."

Meanwhile, Twitter suggestions for Trump replacements in the Home Alone 2 cameo include Ryan Gosling, former US President Barack Obama and Democrat Joe Biden, who is yet to assume presidency.

trump is not going to be happy about the new directors cut of home alone 2 pic.twitter.com/lOKjoLritG

The new Home Alone 2 scene after Trump got banned from twitter. pic.twitter.com/iINPKziMqy

Out of curiosity, I wanted to see what it would look like if you took Trump's scene out of Home Alone 2. It's pretty seamless and you wouldn't really know anything was missing. pic.twitter.com/DkMjwDEufT

In 2019, Donald Trump was asked about his cameo in Home Alone 2 when he said: "I was a little bit younger, to put it mildly... It turned out to be a very big hit, obviously. It's a big Christmas hit, one of the biggest. It's an honor to be involved in something like that," reported news agency AFP.

Meanwhile, Joe Biden's swearing-in as US president on January 20 will be attended by celebs such as Lady Gaga and Jennifer Lopez. Hollywood star Tom Hanks will host the inauguration.

Neena Gupta Strikes Again. Here's Why She's Dressed Like This