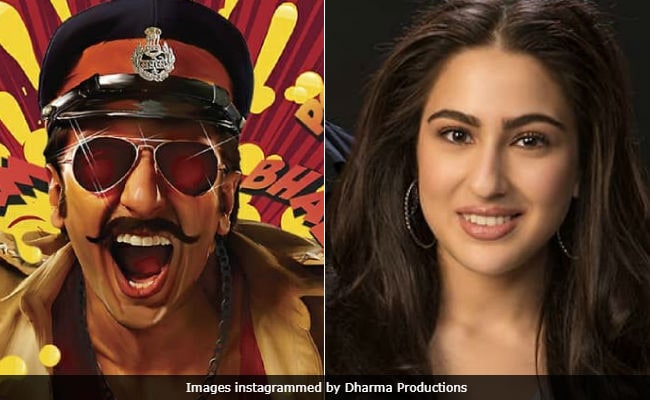 New Delhi: Even before the release of debut film (Kedarnath), Sara Ali Khan has signed her second project. Sara, daughter of actor Saif Ali Khan and his first wife Amrita Singh, will be seen opposite Ranveer Singh in Karan Johar and Rohit Shetty's Simmba. "A stunning fresh face + the unlimited energy of a superstar + the craft of the 2 biggest filmmakers = BLOCKBUSTER already! #Simmba," Karan's Dharma Productions posted on their multiple social media accounts. Dharma Productions, in a separate post, also revealed that Simmba will release on December 28, which is a week after the proposed release date of Kedarnath.

Before Sara's debut project was announced, it was reported that Karan Johar will spearhead Sara's launch in Bollywood. However, director Abhishek Kapoor announced that he has signed Sara for his forthcoming project Kedarnath opposite Sushant Singh Rajput. After a fight between director Abhishek Kapoor and the producers, the filming of Kedarnath suffered and for some time it appeared that film would be shelved. Last week, things went back to normal for the project.

Promoted
Listen to the latest songs, only on JioSaavn.com
Sara Ali Khan is one of the high profile Bollywood debuts movie-goers are waiting for. The other is that of late actress Sridevi's daughter Janhvi - her launch is also handled by KJo in Dhadak. Incidentally, Janhvi's launch film was announced months after that of Sara but it will hit the screens before Kedarnath or even Simmba in July.

Sara Ali Khan is the elder of Saif and Amrita's two children. Sara's younger brother in Ibrahim Ali Khan. Saif is married to Kareena Kapoor and they are parents to one-year-old Taimur.