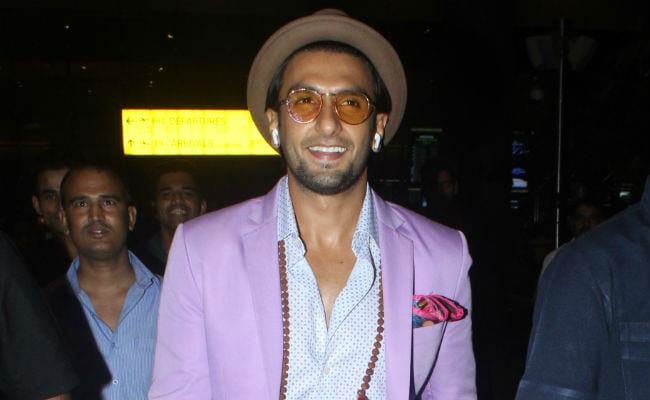 Ranveer Singh at the Mumbai airport.

New Delhi: Actor Ranveer Singh told news agency IANS that he's "attracted" to actors who have "chameleon-like quality." The "Padmaavat" actor told IANS in a recorded response: "I am attracted to those performers the most who have that chameleon-like quality and have that ability to transform into each character. Like the Hollywood actors Daniel Day-Lewis and Johnny Depp, these are some of my biggest heroes." Ranveer Singh has three projects in hand (more about that later), which are vastly different from one another. Ranveer told IANS that like Daniel Day-Lewis and Johnny Depp, who "pick an eclectic mix of characters," he also aspires to include various types of characters in his own filmography. "It is very exciting for me to switch things up," said Ranveer.

"It keeps you stimulated, challenged and it is my constant endeavour and I aspire to be recognised as a versatile performer," Ranveer added.

Ranveer Singh recently received several compliments for his portrayal of Alauddin Khilji in Sanjay Leela Bhansali's "Padmaavat." In the next films, he will play the role of a robust cop in Simmba, an aspiring rapper in Gully Boy and the role of former cricketer Kapil Dev in '83.

"I want the audience to remain excited about my work. I hope they will look forward to my work thinking 'I wonder what he will do next.' Hopefully, I will continue to work hard. It was a very rewarding process to be playing Alauddin Khilji. I learned a lot and I grew a lot in performing the role and I hope I continue to do that in Simmba, Gully Boy and '83," said Ranveer Singh.

"Having mentioned the three films that I am currently committed to, I must express how excited I am to be working with these filmmakers, some of the finest in the business - Zoya Akhtar, Rohit Shetty and Kabir Khan. Each of them is making a film that has their signature all over it. So, I feel very blessed," Ranveer added.