Ranveer Singh Dubbed For Deadpool 2 To 'Give Gallis Onscreen'

Ranveer Singh dubbed for Ryan Reynolds in the Hindi version of Deadpool 2. 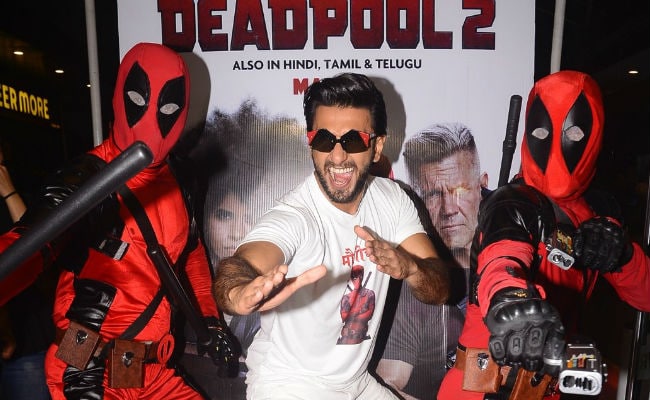 Ranveer Singh at a special screening of Deadpool 2.

New Delhi: Ranveer Singh dubbed for Ryan Reynolds in Friday's big release Deadpool 2 and the 32-year-old actor had the most bizarre reason to take up the project. He told Indian Express: "I thought it would be fun to use foul Hindi language onscreen, to be honest. I just wanted to give gaalis onscreen. That's the long and short of it." Ranveer Singh has dubbed for the first time in his eight-year long career and the "Padmaavat" star said he has "newfound respect for dubbing artistes and voice-over artistes." Marvel's Deadpool 2 is the second standalone film of the superhero and 11th in the X-Men series.

If you've seen the trailer of Deadpool 2 in Hindi, you'd understand what Ranveer Singh meant and if not, watch the trailer now:

Meanwhile, Ranveer Singh is searching for a superhero role that he could play. Bollywood doesn't have too many superheroes - yes, there's Hrithik Roshan as Krrish and Shah Rukh Khan as Ra. One but none of them are like the Hollywood superheroes. Speaking to news agency PTI, Ranveer Singh said: "I have been exploring various superhero subjects for a while now. Of course, none of them have materialised just yet. But I don't think we are very far from seeing a true blue Indian superhero. There are some really interesting characters. Hopefully, not very long from now, we will see a bonafide superhero, a big ticket, big screen bonanza that is truly Indian."