Ranveer Singh referred to himself as "husband of the century" 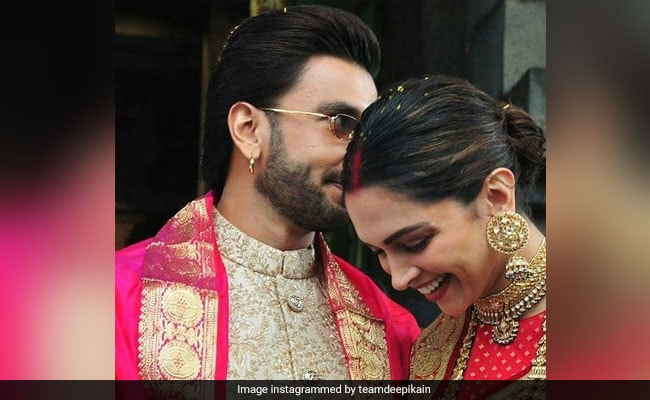 A throwback of Ranveer Singh and Deepika Padukone. (courtesy teamdeepikain)

Ranveer Singh, who is all set to take up quizmaster duties on the TV show The Big Picture, took the picture quiz challenge himself. In a video shared by Colors TV, the actor can be seen answering a few picture-based questions. One such question popped up on the screen, where he was asked to guess the location of a picture taken with wife Deepika Padukone. Responding to the picture, Ranveer said, "I should know, obviously I should know otherwise I'll get a lappad (slap) when I get back home," Ranveer said in Hindi. Comparing their story to Chetan Bhagat's novel 2 States, Ranveer Singh added, "Basically, Deepika and I thought we should do something special on our first anniversary. As you know, our life is similar to 2 States. Her family is from Bengaluru, mine is from Mumbai. So we thought since it's our first anniversary, why don't we visit both places. We went to Golden Temple in Amritsar but before that, we visited the temple seen in the picture, which is Tirupati temple."

Ranveer Singh referred to himself as "husband of the century" after getting the answer right. Check out the video here:

Deepika Padukone and Ranveer Singh got married in a traditional South Indian ceremony - per Konkani rituals in 2018. They also had a North Indian wedding. The couple had an intimate destination wedding in Italy's Lake Como with only close friends and family in attendance. They later hosted grand receptions in Bengaluru and Mumbai.

Deepika Padukone and Ranveer Singh's first film together was Goliyon Ki Rasleela Ram-Leela (2013), which was directed by Sanjay Leela Bhansali. The couple has also co-starred in Bajirao Mastani and "Padmaavat." The couple will soon be seen sharing screen space in Kabir Khan's sports drama '83, in which Ranveer will play the role of Kapil Dev and Deepika will be seen as Kapil Dev's wife. Both the stars have super busy schedules ahead. Ranveer also had a cameo in Deepika's film Finding Fanny.