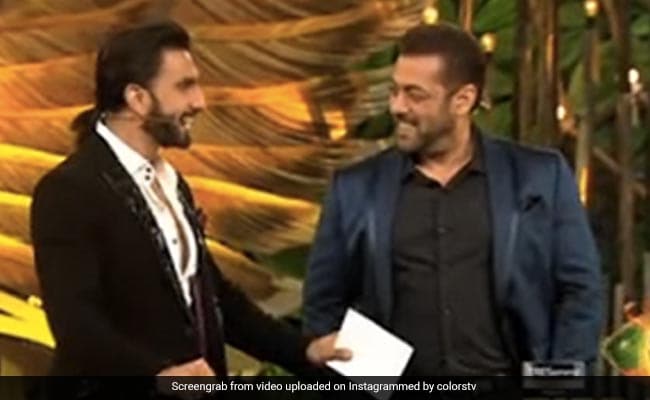 Ranveer and Salman on the sets of Bigg Boss 15. (courtesy colorstv)

Bigg Boss 15 is all set for its grand premiere tonight. This will be Salman Khan's 12th season as the host of the popular TV reality show. This, however, is the story of the man who joined Salman Khan during the grand premiere. We are talking about Ranveer Singh. In a promo video shared by Colors TV, on which the show will air, Ranveer Singh and Salman Khan can be seen in a chatty mood. Ranveer even sang the track Do Mastane Chale Zindagi Banane from Salman Khan's film Andaz Apna Apna. Ranveer Singh visited the sets of Bigg Boss 15 for the promotions of The Big Picture, which will also air on Colors TV and will mark the actor's TV debut.

In the promo video, Salman Khan says to Ranveer Singh "Saath saath me challenge, Colors ki toh nikal padi." Salman also asked Ranveer to demonstrate how he will be hosting his show The Big Picture.

Salman Khan was last seen in the film Radhe: Your Most Wanted Bhai. The film, also starring Disha Patani, Randeep Hooda and Jackie Shroff, was Salman Khan's third project with Prabhu Deva after Wanted ( which released in 2009) and the 2019 film Dabangg 3. The actor will next be seen in Kick 2, with Jacqueline Fernandez and Tiger 3 with Katrina Kaif.

Rhea Chakraborty On Rumours Of Her Participation In Bigg Boss 15