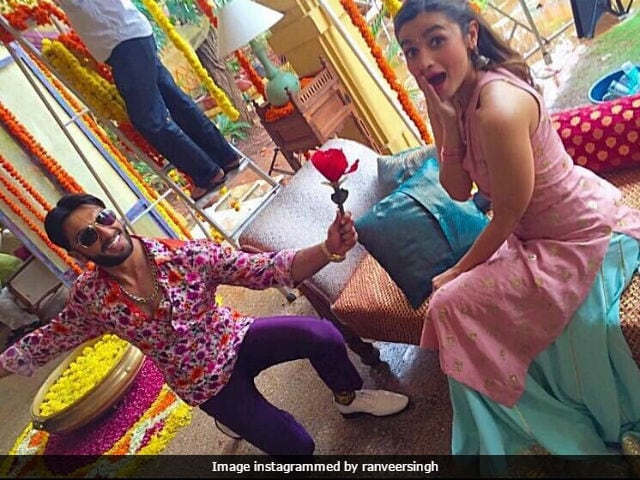 New Delhi: After posting a hilarious video message for his Gully Boy co-star Alia Bhatt, Ranveer Singh has teamed up with the 23-year-old actress to promote her upcoming film Badrinath Ki Dulhania. In the video posted earlier, the actor had said that he was 'Looking faarward' to working with her. The recent video shared by Ranveer Singh can see him grooving to the hit song from Badrinath Ki Dulhania, titled Tamma Tamma along with Alia Bhatt. Ranveer Singh has donned the look of a Sardar. The clip begins with Alia singing a few lines from the song and the 31-year-old actor replying in his Punjabi style. The end of the video, captioned: "Happy Singh Ki Dulhania !!", will definitely make you laugh out loud. Badrinath Ki Dulhania starring Varun Dhawan and Alia Bhatt is slated to release in theatres on March 11.

Alia Bhatt and Varun Dhawan have been actively promoting their upcoming film all across the country. Badrinath Ki Dulhania has been directed by Shashank Khaitan and produced by Karan Johar under Dharma Productions banner. The Dear Zindagi actress and the Dishoom actor will be seen sharing the screen space for the third time. The duo had made their Bollywood debut together in Karan Johar's Student Of The Year(2012). They have also co-starred in Humpty Sharma Ki Dulhania.

Promoted
Listen to the latest songs, only on JioSaavn.com
Ranveer Singh and the Dear Zindagi actress will be coming together for the first time in Zoya Akhtar's Gully Boy. The shoot for the movie is expected to begin from November this year.

The Bajirao Mastani actor and the Highway actress have featured in advertisements for a travel portal together.