"What's important is to get up every time you fall," wrote Rannvijay Singha 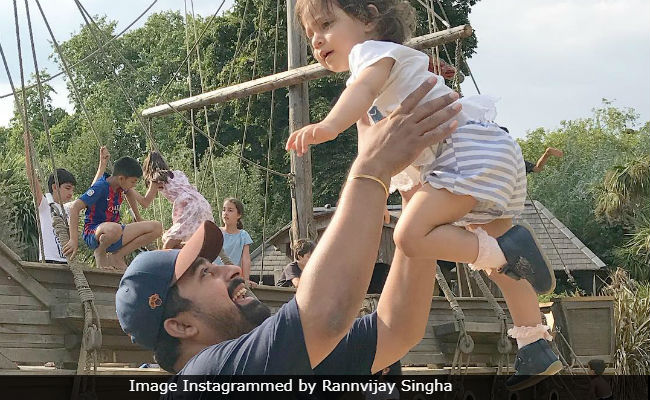 "Don't worry about falling Kainaat," dad Rannvijay Singha is here to catch you. In case you are wondering what we are talking about, let us tell you that we are referring to VJ-turned-actor Rannvijay Singha's latest Instagram post. On Friday, Rannvijay shared an oh-so-adorable picture, which features his little munchkin Kainaat and we must tell you that the picture couldn't be any cuter. In the picture, Rannvijay can be seen holding Kainaat in his arms and her expressions are just priceless. Needless to say, Rannvijay's Instafam simply loved the picture and several comments such as "Why so cute Kainaat?" and "so sweet" were frequently seen on the post. It wasn't just the picture that stole our hearts but also Rannvijay's message for his daughter. He wrote: "Don't worry about falling Kainaat. What's important is to get up every time you fall. For the time being I'm around, and till Dada is around he'll always catch you."

Don't worry about falling @singhakainaat ,what's important is to get up every time you fall. For the time being I'm around, and till Dada is around he'll always catch you. #satnamwaheguru

Kainaat Singha trended big time after pictures from her and Taimur's playdate surfaced on social media. We got a glimpse of Taimur and Kainaat's playdate in London, through Ranvijay Singha's wife Prianka Vohra's Instagram stories, in June. In the video that went viral, the duo were seen playing on a see-saw and we discovered that Kainaat addresses Taimur as "Timbur". So cute!

Kainaat and Taimur even visited the London zoo together, where they were accompanied by their respective mothers Prianka Vohra and Kareena Kapoor. The picture, which was originally shared by Prianka on her Instagram story and was alter curated by fan clubs.

Rannvijay Singha married Prianka Vohra on April 2014. They are parents to one-year-old Kainaat.

Rannvijay Singha is best-known for hosting television reality shows such as MTV Roadies and Splitsvilla. He made his Bollywood debut with the 2009 film Toss: A Flip of Destiny. He also featured in other Bollywood films such as London Dreams, Action Replayy and 3 AM.