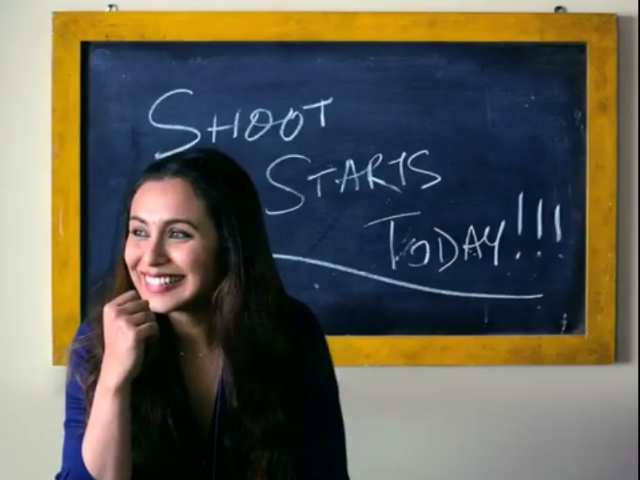 New Delhi: Rani Mukerji is all set to return to the big screen with Hichki, directed by Siddharth P Malhotra. On Tuesday, Yash Raj Films released an 18-second clip on social media, in which the 39-year-old actress can be seen writing on the blackboard - 'shoot starts today.' Rani Mukerji, last seen in Pradeep Sarkar's movie Mardaani (2014), will be making a comeback to the silver screen after a gap of three years. Hichki is likely to be released later this year. Rani Mukerji, who got married to filmmaker Aditya Chopra in 2014, took a break from work after giving birth to her daughter Adira in 2015.

In a statement released earlier, Rani Mukerji said: "I was looking for a script that would challenge and excite me, and Hichki came my way. Each of us has a weakness that pulls us back. It could be a disability or any condition but if we just look at it as simply a hiccup, we can emerge as a winner. It won't come in the way of achieving our dreams. Hichki is built on this positive premise and I decided to take it up."

Promoted
Listen to the latest songs, only on JioSaavn.com
Hichki is being produced by Maneesh Sharma. He made his debut as a director in 2010 with Band Baaja Baaraat starring Ranveer Singh and Anushka Sharma. The other films directed by him are - Shuddh Desi Romance and Fan. Maneesh Sharma also produced the 2015 film Dum Laga Ke Haisha.

Haseena: The Queen Of Mumbai: Siddhanth Kapoor Says He Took Dawood Ibrahim's Role As A 'Challenge'