Neetu's Instafam can't get over the fact that Samara looks just like Neetu Kapoor in the throwback photo. "Sam is your lookalike," read a comment 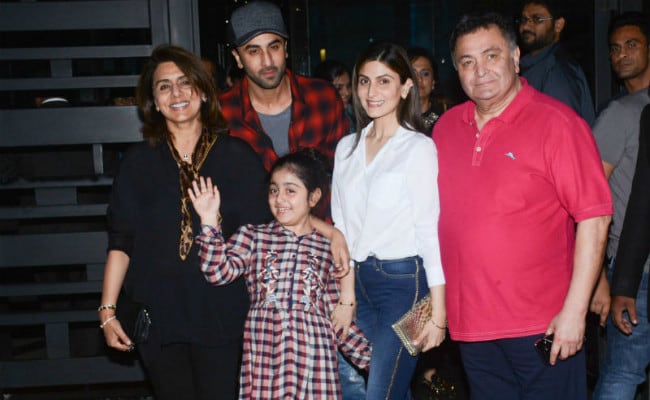 Samara being adorable at a dinner party

New Delhi: By now, it's not unknown that Neetu Kapoor's favourite Instagram subject and on Sunday, her six-year-old granddaughter reappeared on her Instagram feed. But this time, we also spotted a much younger version of the veteran actress - Neetu made a collage of Samara's photo and of herself from when she was 10-years-old and it's hard to miss the uncanny resemblance between the two. Neetu Kapoor's photo is from when she starred in 1968 film Do Kaliyaan as a child artiste. Sharing the photo, Neetu also added a relevant caption, which reads: "Badoan ke gun choton mein aa hi jate hain (my dialogue in do kaliyan)." True that. Neetu Kapoor featured in dual roles in Do Kaliyaan.

Meanwhile, Neetu Kapoor's Instafam can't get over the fact that Samara looks just like Neetu Kapoor in the throwback photo. "Sam is your lookalike," read a comment while another added: "Carbon copy."

Samara is the daughter of Riddhima Kapoor Sahani, who is a jewellery designer. Samara makes frequent appearances on Neetu Kapoor's Instagram. Samara, who is not the least bit camera shy, recently turned out to be a "secret superstar" and here's proof: She recently sang Nachdi Phira from Aamir Khan's movie Secret Superstar.

Promoted
Listen to the latest songs, only on JioSaavn.com
Here's another video of Samara singing like a diva. Meghan Trainor's You Might Have A Mom was on her playlist.

Wat to do with her #samstories

Neetu Kapoor made her acting debut as a child artist in 1966's Suraj, when she was just eight-year-old, after which, she also featured in Dus Lakh, which released the same year. As a child artist, she also featured in films like Waris and Pavitra Paapi. 1973's Rickshawala was her first Bollywood film as a leading actress. She is best known for her roles in films like Kabhi Kabhie and Khel Khel Mein. She was last seen in 2013's Besharam, in which she co-starred with son Ranbir and husband Rishi Kapoor.