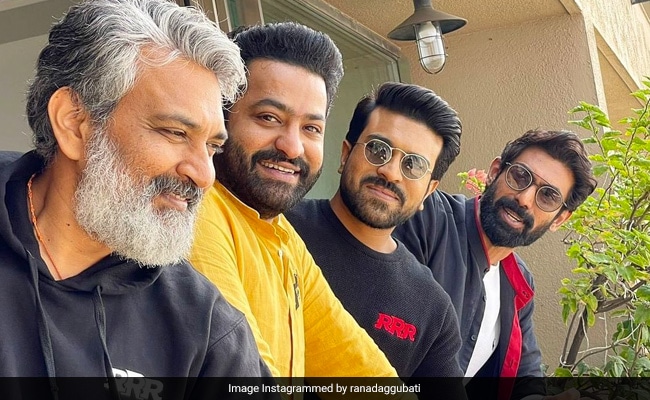 Rana Daggubati, a superstar himself, spent his morning in the company of some incredible talent. The actor spent his morning in Mumbai with the team of RRR. By team, we mean director SS Rajamouli, and actors  Jr NTR and Ram Charan Tej. In the image, the four celebrities are hanging out on a balcony posing for the camera and sharing a laugh. In the image, we can also spot SS Rajamouli and Ram Charan Tej wearing sweatshirts with the RRR logo. In the caption, Rana Daggubati wrote, “Mumbai morning with the MIGHTY R's... RRR with R,” referring to the upcoming film and his own initial.

For the unversed, Rana Daggubati played the lead antagonist in both parts of SS Rajamouli's hugely successful franchise, Baahubali. Replying to the post, businesswoman and Ram Charan Tej's wife Upasana Kamineni Konidela wrote in the caption, “Where's my Rhyme RRRRR.”

RRR, directed by SS Rajamouli, is slated to release in theatres on January 7, 2022.  Much to the delight of fans, the cast of the film has been sharing some behind-the-scenes updates and posts on social media. Recently, Jr NTR, who plays the role of  Komaram Bheem in the film, shared the making of the movie and his character in a video. In the caption, he wrote, “In the making of Bheem for RRR movie.”

On another occasion, Jr NTR also posted a candid picture of him sharing a laugh with co-star Ram Charan Tej during a break in between promotions in Mumbai. He wrote, “Backstage bromance… Gearing up for Roar of RRR in Mumbai.”

Ram Charan Tej too shared a video of the making of his character, Alluri Sitarama Raju, on Instagram. Watch the video here:

RRR, which is set in the 1920salso stars Alia Bhatt, Ajay Devgn and Shriya Saran in important roles.