"There was absolutely no doubt," wrote Samantha 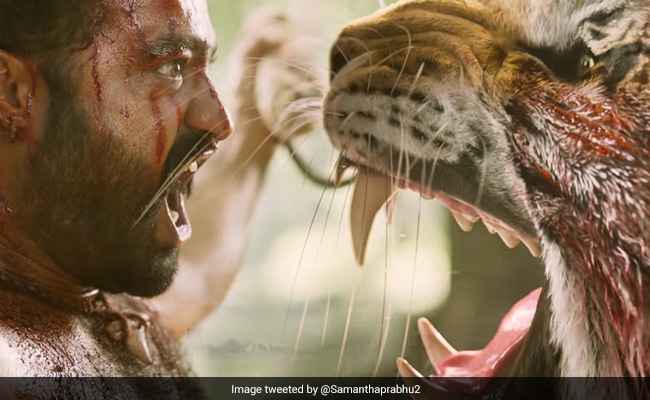 RRR: Jr NTR in a still from the trailer. (courtesy: Samanthaprabhu2)

The trailer of RRR released on Thursday and it started trending instantly. Samantha Ruth Prabhu gave a shout out to the film's trailer, especially with the scene featuring Jr NTR and a tiger. She tweeted, "I believed that this was real 100 percent... There was absolutely no doubt .. Jr NTR you can do anything with that fire in your eyes. #RRRTrailer."RRR, set in the 1920's is a "fictitious story based on two legendary freedom fighters - Alluri Seetharamaraju and Komaram Bheem." RRR boasts of, which includes Jr NTR, Ram Charan, Ajay Devgn, Alia Bhatt, Olivia Morris, Samuthirakani, Alison Doody, Ray Stevenson.

I believed that this was real 100 percent .. there was absolutely no doubt .. @tarak9999 you can do anything with that fire in your eyes #RRRTrailerpic.twitter.com/WHVYE8h83z

The actress also cheered for Ram Charan, who is married to her best friend Upasana. She wrote: "The best transformation I have seen on screen. Fire Fire Fire... Absolutely owned it...In the best form ever."

The best transformation I have seen on screen @AlwaysRamCharan .. absolutely owned it .. in the best form ever #RRRTrailerpic.twitter.com/nb7Fll5tuX

Samantha also cheered for the film's director SS Rajamouli and she wrote: "Speechless."

Samantha Ruth Prabhu and actor Naga Chaitanya announced their separation last month. They were married for over 3 years.