Ram Kapoor And Wife Gautami In A Major Throwback Pic From 2003. "Oh My God," Says The Internet

"Don't you lit my screen on fire," commented a user 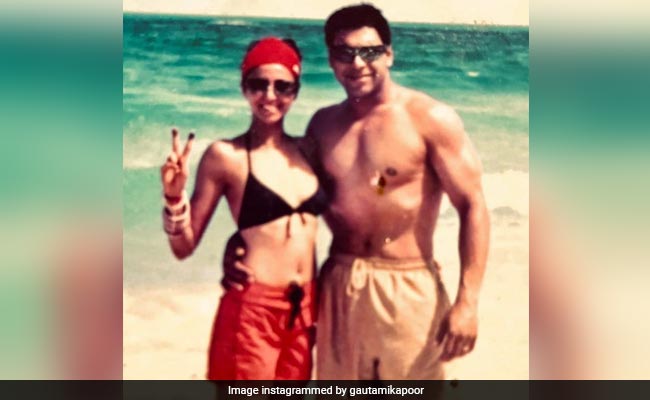 Ram Kapoor's wife and actress Gautami Kapoor left the Internet awestruck by posting a major throwback picture of herself and her husband. The 47-year-old actress, on Monday, treated her fans to an old photograph from her and Ram Kapoor's beach vacation in 2003 - the year they got married. In the blast from the past, the couple look relatively fitter than now. Ram Kapoor, 48, can be seen sporting beige shorts while Gautami looks stunning in black and red swimwear. "The year that was ...... 2003!!" the actress wrote in the caption. Within minutes, her post was flooded with comments like "unbelievable" and "Don't you lit my screen on fire." The general sentiment was - "Oh my god."

"Omg.... The hottest couple is here," commented a user while another wrote: "Dead! Oh my god you guys are just so damn hot. We want more throwback pics please!"

Ram Kapoor and Gautami's romance started after they met for the first time on the sets of soap opera Ghar Ek Mandir. The show was Gautami's first full-fledged small screen appearance whereas it was Ram Kapoor's breakthrough show that made him a household name. Ghar Ek Mandir aired on television from 2000 to 2002. The next year, the couple got married on Valentine's Day.

Gautami Kapoor often shared throwback pictures with Ram Kapoor on her Instagram feed. Like this one, stills from their show Ghar Ek Mandir: