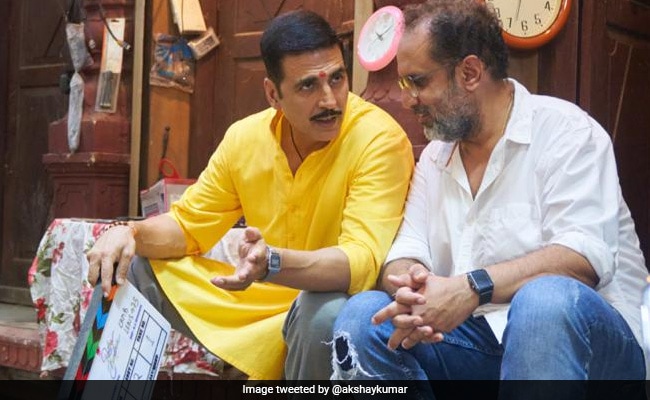 Akshay Kumar began shooting for his next project Raksha Bandhan on Monday. The actor shared a picture from the sets of the film on his social media profile. In the picture, Akshay, dressed in a yellow kurta, can be seen sitting with the film's director Aanand L Rai. The actor shared an update on the film and wrote that it is a "celebration of that special bond" he shares with his sister Alka. "Growing up my sister, Alka was my first friend. It was the most effortless friendship. Aanand L Rai's Raksha Bandhan is a dedication to her and a celebration of that special bond," he tweeted. He added, "Day one of shoot today, need your love and best wishes."

Growing up my sister, Alka was my first friend. It was the most effortless friendship.@aanandlrai's #RakshaBandhan is a dedication to her and a celebration of that special bond
Day one of shoot today, need your love and best wishes @bhumipednekar#AlkaHiranandanipic.twitter.com/Oai4nMTDMU

Earlier this month, Bhumi Pednekar joined the cast of Raksha Bandhan.  Raksha Bandhan will mark Akshay Kumar's third collaboration with Bhumi Pednekar after Toilet: Ek Prem Katha and Durgamati (backed by Akshay Kumar). Bhumi announced her association with the project by sharing a picture on Instagram and she wrote: "A very special film and a very special reunion. Am supremely excited to be collaborating again with two of my favourite creative powerhouses and humans. Am full of gratitude to be a part of this special, heart-touching story Raksha Bandhan."

The film, which will be directed by Aanand L Rai and will be written by Himanshu Sharma, was announced on the occasion of Raksha Bandhan last year. This will be Akshay Kumar's second project with Aanand L Rai after Atrangi Re, which stars Sara Ali Khan and Dhanush.

Supriya Pathak: I'm Doing More Interesting Work Than I Did When I Was Younger