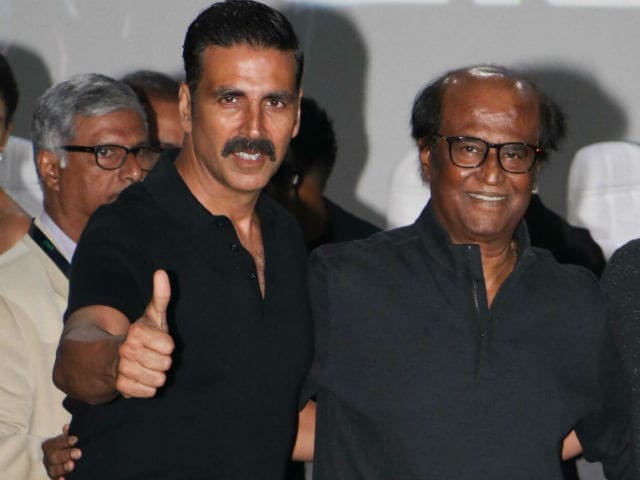 Akshay Kumar and Rajinikanth photographed during the launch of 2.0's first look

New Delhi: An exchange of compliments between Rajinikanth and Akshay Kumar marked the launch of the first look of their new film 2.0 in Mumbai on Sunday. The event was attended by Salman Khan and Karan Johar but it was the mutual admiration between the film's stars that is now hogging headlines. 2.0 is the sequel to Rajinikanth's 2010 blockbuster Enthiran and he returns here in the double role of Dr Veesagaran and Chitti the Robot. Akshay Kumar plays crazed and mutated villain Dr Richard, a fearsome entity left with feather-like eyebrows and talons for nails after a science experiment goes badly wrong. Rajinikanth's co-stars agree that he's the nicest, politest star around and this was in evidence on Sunday when the 65-year-old actor told his audience that the real hero of the film was Akshay.

"In this film I am villain. The truth is hero of 2.0 is not Rajinikanth, but Akshay Kumar," Rajinkanth said, reports news agency PTI. He went a step ahead: "If I was given a choice, I would have taken that character. Hats off to Akshay, he has worked so hard."

"I had no choice," interrupted Akshay, who detailed just how long it took him each day to look the part of Dr Richard. "In my 25 years of career I have never put make up, but in this film pure 25 years ka kasar pura hogaya. It used to take me three hours to put the make up on and one hour to remove it (for the role of villain). I'm a patient guy and with this movie I have become more patient," he said. He killed the hours spent in make up by watching movies on TV.

In a tweet on Monday, Akshay wrote that the warm response to the first look of 2.0 made the hours spent wearing prosthetics on set worthwhile.

"It's a brilliant role, character. The whole country will be proud of Akshay," Rajnikanth said on Sunday.

Akshay Kumar, 49, returned compliment for compliment. "Rajini sir is not a superstar, he is an entire galaxy. If anybody has got swag, be it (lighting) cigarette or putting on coat or anything, it's him. There is no one who doesn't want to learn his style," he said.

Akshay said he was particular impressed by the fact that Rajinikanth compensated distributors when his film Baba flopped in 2002. "I remember his one film Baba had come and it had not done well. And he had called distributors and returned their money. This is the biggest sign of being a superstar," he said.

Promoted
Listen to the latest songs, only on JioSaavn.com
This is Akshay Kumar's first film with Rajinikanth and, by his own account, being cast opposite Thalaiva left him overwhelmed. "I am thankful to (director) Shankar sir and Rajini sir that they thought of me. I was shocked when they choose me to enact in front of him. I'm his fan," Akshay said.

2.0 is directed by Shankar and will release next Diwali. The cast also includes Amy Jackson, Sudhanshu Pandey and Adil Hussain. (With inputs from PTI)