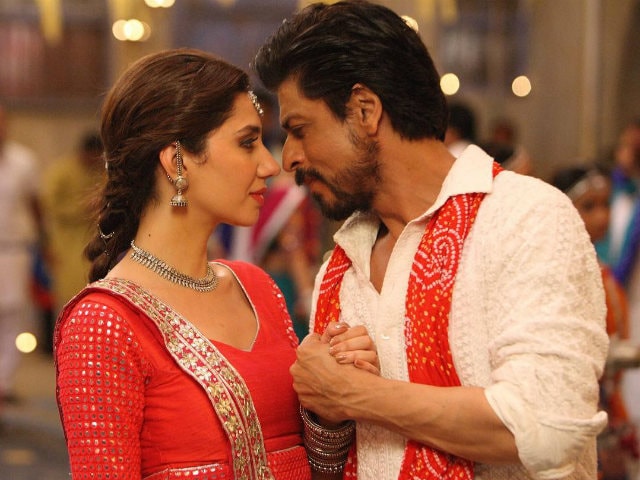 Raees song Udi Udi Jaye: A still from the song

New Delhi: In a tweet this morning, Shah Rukh Khan reminded us that it's almost Makar Sankranti and, therefore, kite-flying time across North India. Almost no film set in Gujarat omits a scene celebrating the tradition of flying kites during the harvest festival, locally known as Uttaraayan. Udi Udi Jaye, the new song from Shah Rukh Khan and Mahira Khan's upcoming film Raees, adds an additional tadka with garba, the vigorous dance form from Gujarat. You might experience a sudden urge to reach for your garba sticks and dance, such is the infectious tune of the song. "It's almost Makar Sankranti, dil ki patang dekho Udi Udi Jaye," wrote Shah Rukh in the tweet sharing the song. Udi Udi Jaye has a very festive feel to it, and marks Shah Rukh's debut garba performance onscreen. Raees is Pakistani actress Mahira Khan's Bollywood debut.

Raees stars Shah Rukh Khan, 51, as liquor baron Raees Alam who operates in the dry state of Gujarat and features Mahira as his love interest. The colourful Udi Udi Jaye celebrates the romance between Shah Rukh Khan and Mahira's characters, beginning with Rarest Bhai admiring the object of his affection from behind a curtain and ending with their wedding. In between, they dance like no one's watching at a garba function and fly kites.

Udi Udi Jaye has been sung by Sukhwinder Singh, Bhoomi Trivedi and Karsan Sagathia and has lyrics by Javed Akhtar. Ram Sampath is the composer of the song.

In an interview with mid-day, Raees director Rahul Dholakia explained the reason behind including a garba-special song in the film. "Uttaraayan is one of the biggest festivals in Gujarat and garba is our state dance. No film rooted in Gujarat is complete without either of them. A majority of writers in the film were Gujaratis and we decided to include a special song, which will take the story forward," he told mid-day.

Raees releases on January 25, when it will clash with Hrithik Roshan's Kaabil.