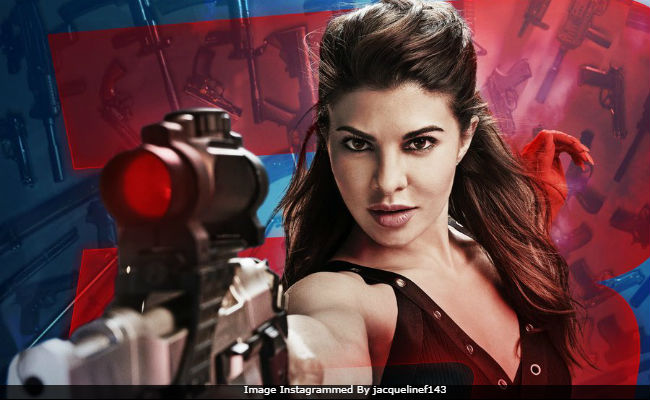 Race 3: Jacqueline Fernandez in a poster from the film (Image courtesy: jacquelinef143)

New Delhi: After Salman Khan's first look from his forthcoming film Race 3 was unveiled, here's his co-star Jacqueline Fernandez's look. She plays Jessica in the film and introduced her character as, "... and power can be dangerous!!" In the poster, Jacqueline, dressed in black, holds a gun in hand. (Just like how Salman's character was introduced). Race 3 is Salman and Jacqueline's second film together after 2014's Kick. In the film, Jacqueline will be seen doing some action sequences for which she learnt martial arts (more on that bit later). Race 3, directed by Remo D'Souza, also stars Anil Kapoor, Daisy Shah, Saqib Saleem and Bobby Deol.

Have you seen the logo of Race 3 yet?

Salman and Jacqueline's Race 3 is the third film in the franchise. The previous two Race films were headlined by Saif Ali Khan. Jacqueline was also a part of Race 2.

Of the action sequences, Jacqueline's fitness trainer Kuldeep Sashi told news agency IANS, "As a requirement to her character, she is undergoing extensive (Mixed Martial Arts) MMA training, focusing towards kicking and punching. The action sequences that Jacqueline has to perform are very demanding. They require application of the right techniques. As she has never performed hand-to-hand combat or martial arts before, getting the style and techniques right is our only focus."

Race 3 went on floors in November and director Remo D'Souza shot the last schedule of the film in Abu Dhabi last week.