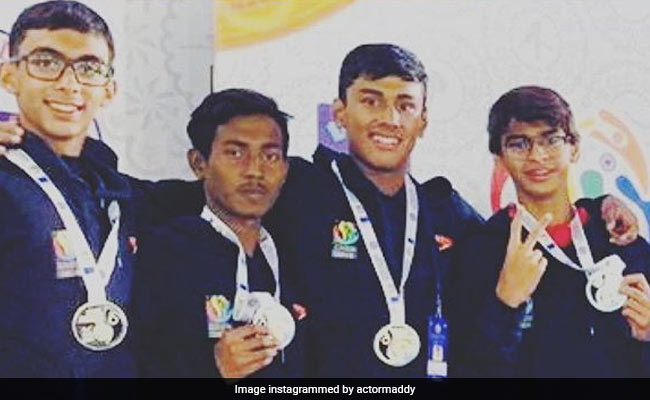 Actor R Madhavan couldn't be more proud as his 14-year-old son Vedaant clinched a silver medal in the 4x100m freestyle relay for 'Group II' boys at the Asian Age Group Swimming Championship. Vedaant, along with other participants Utkarsh Patil, Sahil Laskar and Shoan Ganguly, won a silver medal in the category while Thailand claimed the gold medal and Japan won bronze in the third spot. India also won gold in the 4x100m men's freestyle relay at the Asian Age Group Swimming Championship. Just days after India's big win, Madhavan shared an appreciation post for the young swimmers, including his son. "India gets her silver medal at the Asian Games. God's grace... Vedaant's first official medal representing India," R Madhavan captioned a collage of photos from the Asian Age Group Swimming Championship, in which Vedaant and his teammates can be seen posing with their silver medals.

Congratulations poured in on Madhavan's post for his son with Rohit Roy one of the first ones to comment: "Incredible achievement! Congrats Vedaant and team India!" Actor Anup Soni added: "Super... Congratulations Maddy, Sarita, Vedaant."

Madhavan has always celebrated Vedaant's achievements as a young swimming champ on social media. Last year, when Vedaant was yet to celebrate his 13th birthday, he won bronze for India at an international swim meet in Thailand. "Proud moment for Sarita and I as Vedaant wins his first medal for India in an international swim meet in Thailand today. Thank you for all your blessings," Madhavan had Instagrammed.

Proud moment for Sarita and I as Vedaant wins his first medal for India in an international swim meet in Thailand today. Thank you for all your blessings .

Madhavan had also celebrated Vedaant's first gold at a national championship like this: "Boy wins his first gold at the nationals for the 100 m free style... God grace and thank you all for your blessings. Proud, grateful and humbled."

Boy wins his first Gold at the Nationals for the 100 m free style...God grace and thank you all for your blessings.Proud , grateful and Humbled .

R Madhavan, best known for films such as Saala Khadoos, 3 Idiots, Rang De Basanti and the Tanu Weds Manu Manu series. R Madhavan will next be seen in Rocketry: The Nambi Effect, which is based on the life of former Indian Space Research Organisation (ISRO) scientist Nambi Narayanan.