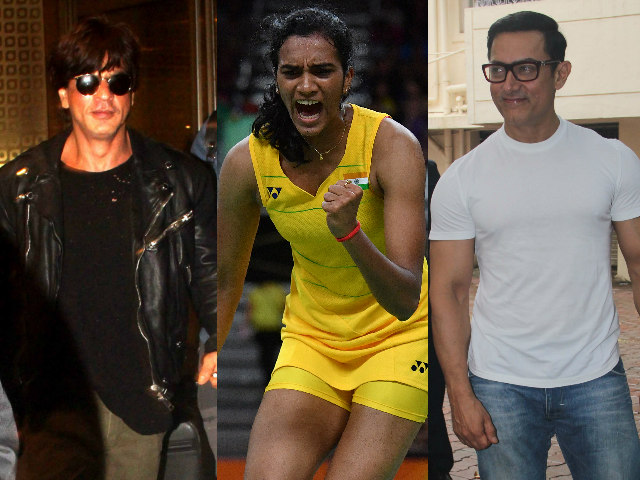 New Delhi: It was a lucky Thursday for India at the Rio Olympics. Badminton star P V Sindhu advanced to the finals on Thursday, beating Japan's Nozomi Okuhara in straight games. Tweets congratulating the Olympian have been pouring in from those who watched, including celebrities like Amitabh Bachchan, Shah Rukh Khan, Aamir Khan, Arjun Kapoor, Ranganathan Madhavan and Dhanush. Shah Rukh's tweet also had mention of wrestler Sakshi Malik, hours after her historic win.

PV Sindhu's entry to the finals has assured India with a silver medal in the ladies singles badminton tournament. Here's how the stars cheered for Ms Sindhu on Twitter:

T 2352 - #PVSindhu in Finals of women's badminton ..never before has any Indian ever reached the finals of this sport at #Rio2016 ..HISTORY

T 2352 - Never ever underestimate power of female gender ! #PVSindhu you have destroyed so many 'naysayers' .. you are the PRIDE of INDIA !

Way to go Sindhu! Congratulations! You have made India proud!!! All the very best for the finals. Love.a.

Lead India to glory @Pvsindhu1 !!! What an achievement reaching the final...India is proud !!!

Totally joy n a big shout out to you girl! #PVSindhu all the best for the finals! Bring home the medal #Rio2016pic.twitter.com/2LWcIH0fAn

#RioOlympics2016 Sindhunassures India at least a silver but me this

But this is spectacular ... Me thinks Golden in pocket of this super elegant graceful player.. Goooo Sindhuuuuuuu

So I totally believe India will get their first GOLD without a doubt .. Thanks to super women Sindhuuuuuuu...

#RioOlympics2016 game. Go the Golden Gazelle...Sindhu does it with elan....