"East Or West, Dimple Kapadia Is The Best": Twinkle Khanna Roots For Mom As Tenet Opens In Some Cinemas 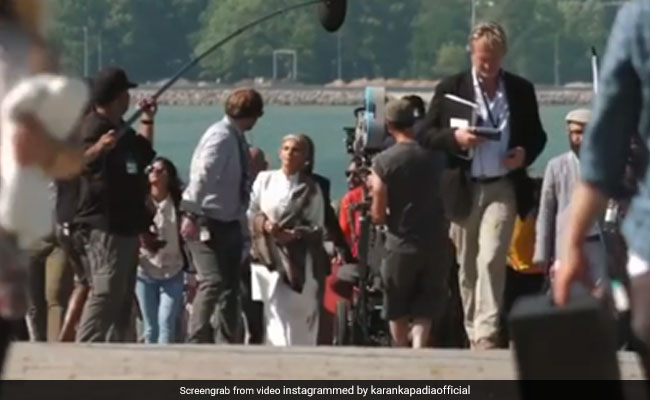 Dimple Kapadia on the sets of Tenet. (Image courtesy: karankapadiaofficial)

Twinkle Khanna and her actor cousin Karan Kapadia on Instagram rooted for actress Dimple Kapadia, who features in Christopher Nolan's new film Tenet, which opened in select cinemas (but more on that later). Twinkle wrote, "East or West, Dimple is the best. I never thought I would riff on an Anu Malik song but this one had to be done" and added the hashtags #Tenet #ProudDaughter #behindthescenes. Karan, who debuted in Bollywood in 2018's Blank, captioned the post: "I'm so proud of you." In the video, Dimple Kapadia can be seen speaking about Christopher Nolan in one of the promotional interviews for Tenet. Dimple Kapadia said, "This man, he just stands there... I don't know how he does it. His involvement is more than 100 per cent."

The video also included a few scenes from the movie featuring Dimple Kapadia and some BTS shots, in which Christopher Nolan can be seen working with the actors.

East Or West, Dimple is the Best! I never thought I would riff on an Anu Malik song but this one had to be done:) #Tenet #ProudDaughter #behindthescenes

Karan is the son of Dimple Kapadia's sister Simple Kapadia - she won the National Award for costume designing for Rudaali. Simple Kapadia has also featured in movies like Pyaar Ke Do Pal and Anurodh.

Meanwhile, Dimple Kapadia plays a pivotal role in Tenet, which features John David Washington in the lead role along with actors Robert Pattinson, Elizabeth Debicki, Michael Caine and Kenneth Branagh. Parts of the movie were filmed in India and at that time, Karan also accompanied Dimple Kapadia on the sets.

The espionage drama released in select theatres in 70 countries including the United Kingdom, Canada, Germany, Italy, Japan, South Korea and Russia. It is one of the first big-budget films to hit the big screens after the cinemas reopened having shut down due to the coronavirus pandemic. Actor Tom Cruise watched the movie in London (where he was filming Mission: Impossible 7) and said that he "loved it."