Tom Cruise Went To A Cinema To Watch Christopher Nolan's Tenet. His Verdict

Tom Cruise travelled to the theatre in a SUV and when some people recognised him, he said, "How does that happen? I'm wearing a mask" 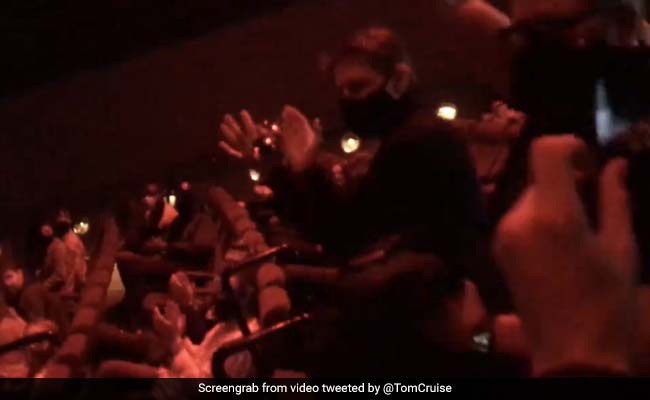 Tom Cruise in a theatre in London. (Image courtesy: TomCruise)

Actor Tom Cruise surprised moviegoers in London by attending a preview show of Christopher Nolan's espionage drama Tenet, one of the first films to release after the theatres reopened post shut down due to the coronavirus pandemic. The 58-year-actor shared a video of his trip to the movie theatre on social media and wrote, "Big Movie. Big Screen. Loved it." In the video, Tom Cruise, dressed in an all-black outfit complete with a facemask, travelled to the theatre in a SUV. When people on the sidewalk waved to him, he waved back and said, "How does that happen? I'm wearing a mask." When he arrived at the theatre, Tom Cruise said, "Here we are, back to the movies." Tom Cruise is then shown seated in a packed theatre applauding as the movie began. As he exited the theatre after watching the film, a moviegoer asked him, "Did you enjoy it?" He replied, "Loved it."

Tom Cruise was reportedly filming Mission: Impossible 7 in London while he will be next seen in Top Gun: Maverick scheduled for Christmas 2020 release.

Here's the video of Tom Cruise's trip to the theatre:

Tenet was scheduled for July 2020 release but it was postponed due to the coronavirus outbreak. Today, it opened in a few theatres in 70 countries, including the United Kingdom, Canada, France, Germany, Italy, Japan, South Korea and Russia, and it will release in select cities in the US in September.

So, What Did Taapsee Pannu And Her Sisters Do In Maldives? Her ROFL Post Is The Answer