"When the glam is so fun you gotta go out," wrote Priyanka Chopra 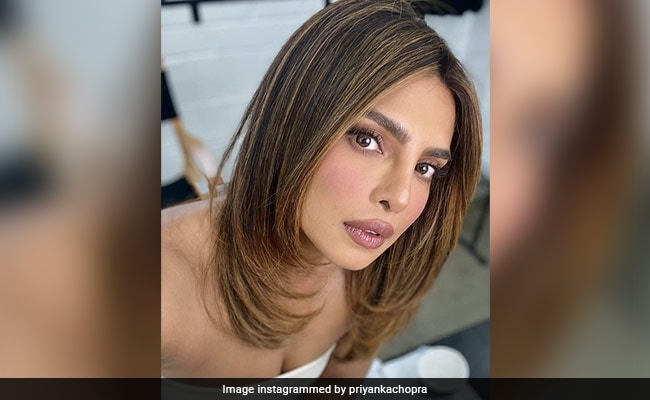 Priyanka Chopra looks gorgeous in every style. Speaking of which, the actress has treated her Insta family to glamorous pictures showing off her new look. In the images, the actress is sporting shorter hair in a new shade as she poses for selfies in a white off-shoulder ensemble. Sharing the photos, she wrote, "When the glam is so fun you gotta go out. #nofilterneeded." Soon after the global actress shared the post, her industry friends and fans flooded the comment section. Paris Hilton commented, "Gorgeous." Farah Khan Ali wrote, "Gorgeous you," followed by fire and heart emoticons.

"Pretty pretty Priyanka," a user wrote, while another wrote, "Love this new look Priyanka! You look so happy. I am so happy for you! Have fun!"

On Monday, Priyanka Chopra offered a sneak peek of her weekend diaries. The actress spent Sunday with her daughter Malti Marie Chopra Jonas and husband Nick Jonas on Malibu beach, California. She shared several adorable photos on her Instagram handle and captioned it as "Sunday" with a heart eyes emoticon. In the images, Priyanka and Nick are twinning in black jackets, while their daughter (in Priyanka's arms) can be seen in a yellow ensemble.

Priyanka Chopra's daughter Malti Marie turned one on January 15. The actress was featured on the cover of British Vogue with her daughter and opened up about motherhood. In the interview, she revealed that Malti Marie had to be delivered preterm, which led to a few health complications. "I was in the OR (operating room) when she came out. She was so small, smaller than my hand. I saw what the intensive-care nurses do. They do God's work. Nick (husband Nick Jonas) and I were both standing there as they intubated her. I don't know how they even found what they needed to intubate her. We spent every single day with her on my chest, on my husband's chest. I didn't know if she would make it or not," recalled Priyanka Chopra.