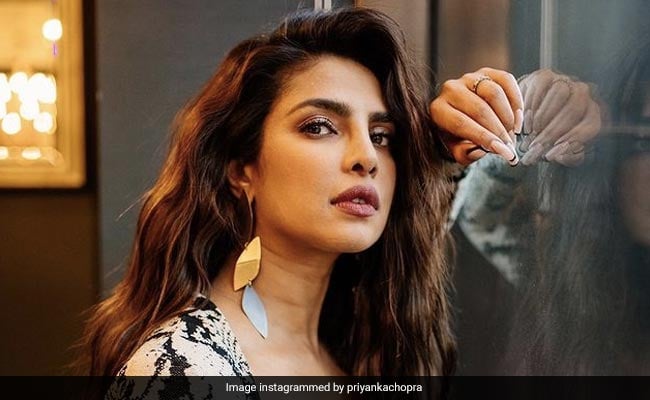 Priyanka Chopra needs no introduction and not many would disagree with this. Right? The reason we are saying this is because, on Friday, Priyanka Chopra, who is a global icon, schooled a media publication for referencing her as "the wife of" Nick Jonas despite her sporting many hats, including that of an actor, a producer, an author, an entrepreneur and a UNICEF Goodwill Ambassador. She is one of the biggest stars in Bollywood and a renowned face in Hollywood. Priyanka, who married singer-actor Nick Jonas in December 2018, shared screenshots of an article published by Daily Mail on Thursday on her Instagram story - the article mentioned the global icon, who was promoting The Matrix Resurrections in New York, as "the wife of Nick Jonas."

"Very interesting that I am promoting one of the most iconic film franchises of all time and I am still referenced as 'the wife of...'," wrote the 39-year-old actress in a strongly-worded note and added: "Please explain how this still happens to women? Should I add my IMDb link to my bio?" 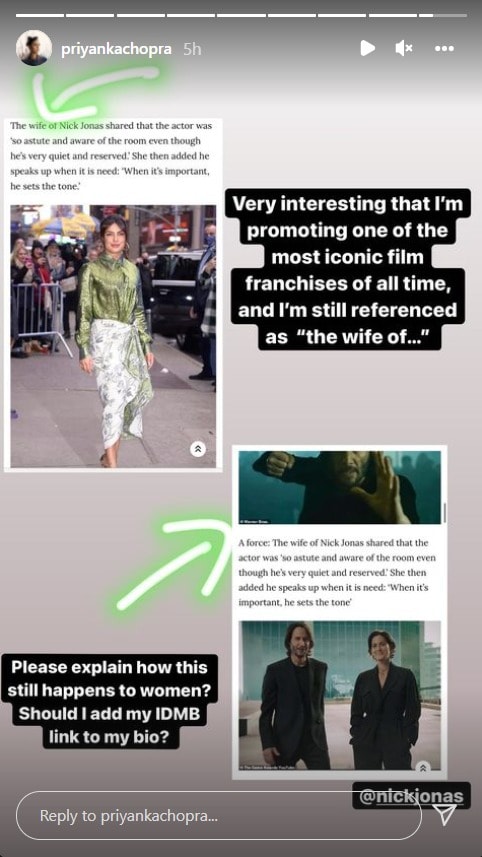 Labelling Priyanka Chopra as just "the wife of" Nick Jonas is certainly an insult to her professional life. She is, in fact, "the most popular Jonas" (in her own words) and we totally agree. Recently, on the Jonas Brothers Family Roast that premiered on Netflix, Priyanka owned the room with her burn segment. Commenting on her popularity compared to the Jonas Brothers worldwide, the actress had said: "Have you noticed how much content the Jonas Brothers post online? They are forever on Instagram, always on the phone - it's cute. I'll tell you why - all of them combined have less followers than me. So, I guess the most popular Jonas is - @Priyanka Chopra on Instagram."

This isn't the first time Priyanka Chopra had faced bias in international media. Back in 2018, when she married Nick Jonas in Jodhpur, an article for The Cut called her a "modern-day scam artist." The Cut writer Mariah Smith had written in the article: "All Nick wanted was a possible fling with Hollywood's latest It Woman, but instead he wound up staring straight at a life sentence with a global scam artist." Following major criticism online, the article was removed from the Internet and the writer even issued an apology: "I want to sincerely apologise to Priyanka Chopra, Nick Jonas, and to the readers I offended and hurt with my words. I do not condone racism, xenophobia, or sexism. I take full responsibility for what I wrote, and I was wrong. I am truly sorry."

Priyanka Chopra is a former Miss World and a woman of many hats. She is the first South Asian woman to lead the cast of an American television show - Quantico - and has featured in many Hollywood projects. She was recently filming for Russo Brothers' new series Citadel. The actress, last seen in Netflix's The White Tiger, will be seen alongside Keanu Reeves and Carrie-Anne Moss in The Matrix Resurrections in January next year.

Priyanka Chopra is also a tech-investor and also counts as a UNICEF Goodwill Ambassador. She runs a hair care brand called Anomaly Haircare and she has also launched an Indian restaurant called Sona in New York.