"She is very musical and she has had a musical career as well," said Nick Jonas 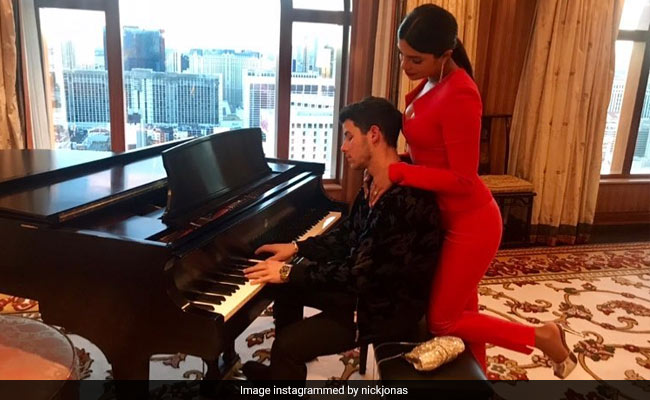 Nick Jonas is keeping himself and his wife Priyanka Chopra musically occupied during the coronavirus lockdown. The singer, in a recent interview with SiriusXM Radio, spilled the beans on how his wife or should be say his protégé Priyanka has been performing so far. "She is picking it up and doing a very good job," Nick said during the interview. The Jumanji actor added, "She is very musical and she has had a musical career as well. She was signed as a recording artist in the US and in India. She picked up very quickly. But I am not a very good teacher, I'll admit that. I would love to learn how to best explain what is what because I learnt by ear so I had no sort of reference point."

Priyanka Chopra has also featured alongside Nick Jonas in Jonas Brothers' tracks What A Man Gotta Do and Sucker. The actress is regularly spotted cheering for her husband at Jonas Brothers' concerts across the globe. Priyanka's association with music needs no introduction. She released her first single In My City in 2012. An year later, her new track Exotic, featuring Pitbull came out. In 2014, she debuted as a playback singer in Bollywood with the song Chaoro for the 2014 biopic Mary Kom, in which she played the titular role. She also sang the title track of Dil Dhadakne Do with Farhan Akhtar in 2015.

Priyanka Chopra married Nick Jonas in a Christian and a Hindu ceremony in Jodhpur's Umaid Bhawan Palace on December 1 and 2 in 2018. The couple later hosted receptions in Delhi and Mumbai. Ralph Lauren was the official couturier for the Church wedding, while Sabyasachi designed the outfits for the Hindu ceremony, which took place the next day. Priyanka and Nick met during 2017's Met Gala, where they both represented Ralph Lauren.