Priyanka Chopra's Daughter Malti Marie Is A "Desi Girl" Like Her. See Pic Inside 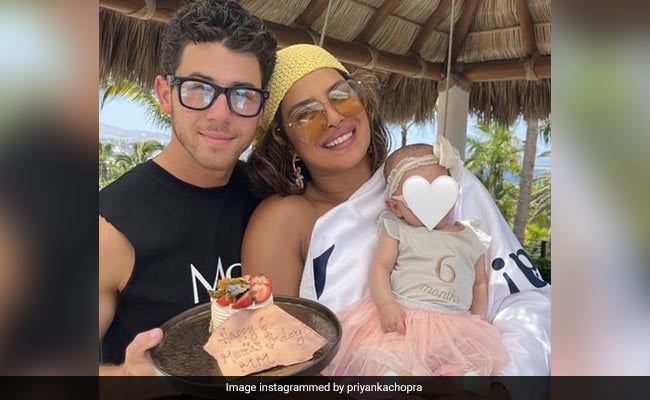 Priyanka Chopra shared an adorable picture of her daughter baby, Malti Marie, on Instagram. The actress, on Thursday, shared a glimpse of the little one wearing a onesie with the words "desi girl" written on it and tagged husband Nick Jonas in the post. The words "desi girl" are often used for Priyanka Chopra, after she danced to the song Desi Girl from her film Dostana (2008). Priyanka, who is living with her family in Los Angeles, often shares glimpses of her baby girl without revealing her face in the pictures.

Take a look at Priyanka's post on Malti Marie below: A few days after her birthday, Priyanka shared pictures of the grand party, hosted by Nick, in Mexico. One of the images featured a cute family portrait of Priyanka, Nick and Malti posing for the camera. The little one had a frock on with the words "6 months" on it. However, Maltie, again, had a white heart emoji to conceal her face.

Priyanka Chopra and Nick Jonas welcomed their first child in January this year via surrogacy. However, baby Malti was only discharged from the hospital after staying 100 days in the newborn intensive care unit (NICU). On Father's Day, Priyanka shared a cute picture of Malti and Nick and wrote: "Happy 1st Father's Day my love. To watch you with our little girl is my greatest joy..what an amazing day to come back home... I love you.. here's to many more."

Meanwhile, the 40-year-old actress is gearing up for the release of her Hollywood film, It's All Coming Back To Me co-starring Sam Heughan and Celine Dion.