The Jonas Brothers kick-started their Happiness Begins tour on Wednesday and Priyanka, Sophie and Danielle were the loudest cheerleaders 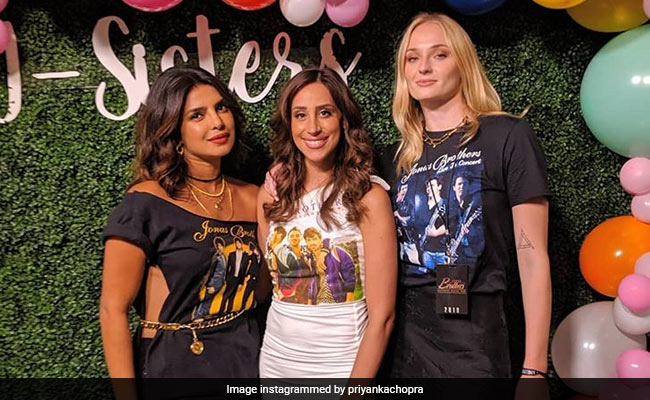 How cool are the Jonas Sisters? Very. Priyanka Chopra (married to Nick Jonas), Sophie Turner (Joe Jonas' wife) and Danielle Jonas (wife of Kevin Jonas) have nicknamed their fam group of three as the 'Jonas Sisters' and we love it. The Jonas Brothers kick-started their Happiness Begins tour on Wednesday with their first concert in Miami, Florida and Priyanka, Sophie and Danielle were the loudest cheerleaders in the concert hall. The Isn't It Romantic actress shared glimpses of the Jonas Brothers' performance on her Instagram stories followed by a few priceless photos from the event venue.

Priyanka's pictures are proof that Nick Jonas not only took along the pack of Jonases but also a bunch of Chopras to their big event. Spotted posing for a group photo were Priyanka's brother Siddharth, mom Madhu Chopra, Nick's parents Denise and Paul Kevin Jonas and the youngest Jonas brother Frankie. "Family. Happiness Begins sold out tour! Crushed it! So proud of you guys," Priyanka captioned one of the photos while for another, she added: "The J-sisters for life." Our personal favourite is the one in which Priyanka, Sophie and Danielle are twinning in matching tees that say 'Jonas Brothers'. How cool is that?

Take a look at photos from the Happiness Begins tour here:

Family. #HappinessBegins sold out tour!! Crushed it! So proud of u guys! @jonasbrothers @nickjonas @kevinjonas @joejonas

After performing at their sold-out show in Miami, the Jonas Brothers tweeted this: "Miami night one was insane. We love you guys."

Miami night one was insane. We love you guys. #HappinessBeginsTourpic.twitter.com/CWYHSD2YX3

Happiness Begins is the Jonas Brother's first mega tour after they reunited earlier this year. The Jonas Brothers will cover 90 locations across North America and Europe as part of their tour, which comes to an end next year with the final performance in Paris on February 22.