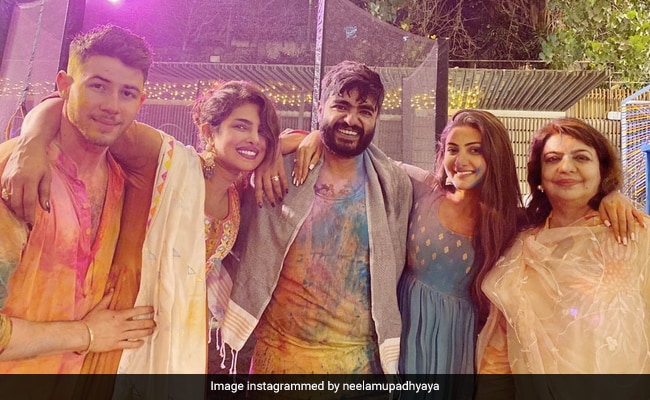 Priyanka Chopra, who is currently in Los Angeles with husband Nick Jonas, shared an adorable birthday greeting for actress Neelam Upadhyaya, who is rumoured to be dating Siddharth Chopra. Sharing a family of Neelam with the Chopras from this year's Holi celebrations, Priyanka wrote: "Happy birthday, Neelam. Have a good one!" on her Instagram story. Neelam re-shared Priyanka's wish on her story and wrote: "Thank you so much, come back soon." Priyanka, who usually shuttles between the US and India throughout the year, hasn't flown back home since her last visit during Holi, because of the coronavirus situation.

Here's the birthday greeting Priyanka Chopra sent for Neelam Upadhyaya all the way from Los Angeles. 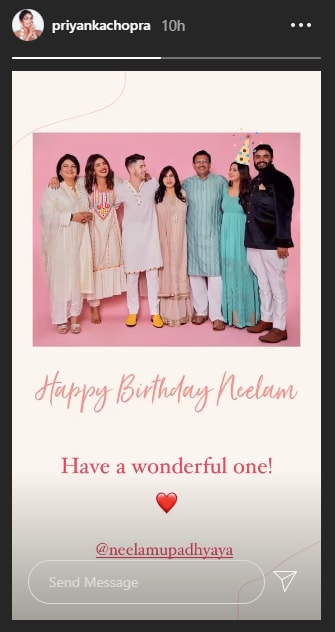 Priyanka's brother Siddharth Chopra also dedicated this heart-warming message to Neelam: "Wish you a very happy birthday Neelam Upadhyaya. Have all the cake you can and celebrate each moment. Have a blessed and a great year ahead." Priyanka and Siddharth Chopra's cousin Meera Chopra, also an actress, also sent best wishes to the birthday girl: "Happy birthday Neelam Upadhyaya. I wish you get everything that you desire. Lots of love to you."

Wish you a very happy birthday @neelamupadhyaya. Have all the cake u can and celebrate each moment. Have a blessed and a great year ahead🎊🎉🤗

Neelam Upadhyaya was first spotted with Siddharth at a showbiz event last year, at the Ambanis' Ganesh Puja. She also attended the Ambanis' Holi party earlier this year along with Siddharth Chopra and hung out with Priyanka Chopra and Nick Jonas at the party. A few months later, Neelam refuted rumours that she's engaged to Siddharth Chopra after a photographer described the actress as Siddharth's "fiancee" in a post, in which she was seen sporting a ring. "The ring is on my right hand. We're not engaged," said Neelam.

Neelam Upadhyaya made her acting debut with 2012's Telugu movie Mr.7, since when she has also featured in Telugu film Action 3D and Tamil projects Unnodu Oru Naal and Om Shanthi Om.