Priyanka Chopra Reveals She Was Once Body-Shamed About 'Disproportionate' Nose 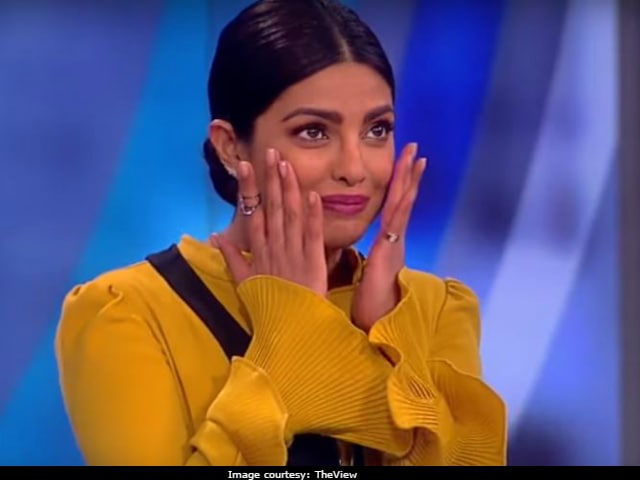 New Delhi: Actress Priyanka Chopra revealed on talk show The View that she had once been body-shamed by a film producer who apparently dismissed her nose and figure as 'disproportionate.' Asked, Priyanka also said she hasn't modified her nose surgically. "Before I became an actress, I met a producer-director about the possibility of acting and I was a beauty pageant winner at that time. I was Miss World. And he said everything was wrong about me - that my nose was not proportionate, that the shape of my body is not proportionate," Priyanka Chopra, 34, said.

Conversation on The View turned to body-shaming because of actress Debra Messing, who recently claimed that the director of 1995's A Walk In The Clouds, in which she played the faithless wife of Keanu Reeves' character, interrupted filming, claiming her nose needed fixing. Asked about her nose on The View, Priyanka said, "Yes, this is my original nose. Please tell everyone that because people think I have a lot of things done. Please, just say that."

She also said that being scrutinized and criticised for the way she looks doesn't bother her. "There's such a false perception of what women should look like and what our body should look like, especially when we are in the business. You put on a couple of pounds and people are like body-shaming you. It happens. Christmas happens to all of us. I have Diwali, I have Holi, I have like a hundred holidays that happen to me. So my body fluctuates, and you know what? I'm fine with it," Priyanka Chopra told The View hosts.


Priyanka Chopra, star of TV series Quantico, has already appeared on popular chat shows like The Ellen Show, The Tonight Show With Jimmy Fallon, Jimmy Kimmel Live and The Late Show with Stephen Colbert. On The View, Priyanka was joined by Lion actor Dev Patel, with whom pictures were shared on social media.

We enjoyed hearing the incredible story of Saroo Brierley today. Thanks for joining us Dev! Good luck at the #Oscars!

We loved everything about @priyankachopra's visit today! Thanks for joining us!

Back home, Priyanka Chopra was last seen in Prakash Jha's Jai Gangaajal . She is expected to sign two new Bollywood films this year. Meanwhile, she is all set for her Hollywood debut in Baywatch, co-starring Dwayne Johnson and releasing on May 19.