"To serve as your Goodwill Ambassador is the privilege of my life," said Priyanka Chopra 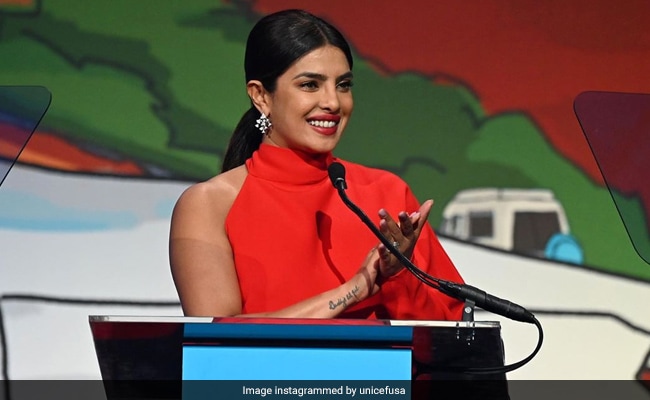 Actress Priyanka Chopra, United Nations Children's Fund's (UNICEF) Goodwill Ambassador for child rights, has been associated with a number of social causes and the actress was rewarded for her work at the 15th annual UNICEF Snowflake Ball, on Tuesday. She was presented with the Danny Kaye Humanitarian Award. The 37-year-old actress, who was accompanied by her mother Madhu Chopra, shared pictures from the event on social media. An excerpt from Priyanka's post read, "I am in awe of the tireless efforts and unwavering commitment of the people who work for UNICEF. Thank you for allowing me to be part of this journey. To serve as your Goodwill Ambassador is the privilege of my life."

Here are the pictures shared by Priyanka Chopra:

The Quantico actress has been associated with the international welfare organisation UNICEF for almost a decade and has worked towards causes pertaining to child rights, women rights and environment, to name a few. Earlier this year, the actress visited Ethiopia, to be a part of the program that focused on empowering girls and boys.

On the professional front, Priyanka Chopra was last seen in Shonali Bose's The Sky Is Pink while she's busy making Netflix film The White Tiger, co-starring Rajkummar Rao. She also has Netflix's superhero film We Can Be Heroes and a film with comedian Mindy Kaling in the pipeline. Priyanka recently dubbed for the Hindi rendition of Disney's Frozen 2, along with her cousin Parineeti Chopra.