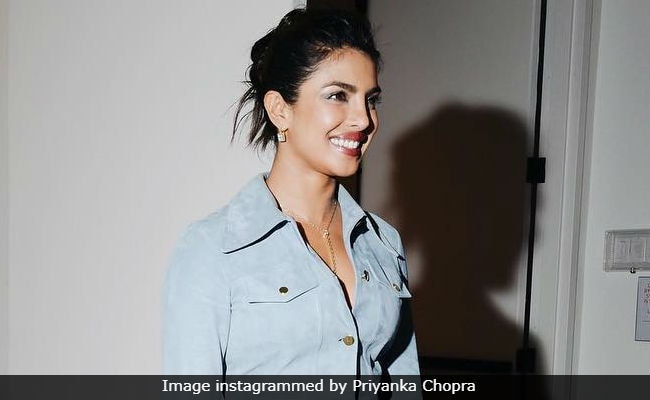 Actress Priyanka Chopra is reportedly being considered by Meghan Markle and Prince Harry to be their soon-to-be-born baby's godmother, several international websites including Express.co.uk, International Business Times and Khaleej Times reported. Royal commentator Andrea Boehlke told Express.co.uk that the former Suits actress and her husband are contemplating more than one godparent for their baby and that Priyanka. "Priyanka Chopra has been mentioned, as has Misha Nonoo, the fashion designer. Lots of people to choose from," she was quoted as saying. Ms Boehlke's quote to Express.co.uk has also been cited by several websites.

Ms Boehlke also told Express.co.uk that stylist Jessica Mulroney, whose daughter was one of Meghan Markle's bridesmaids, is also on the list of celebs, reportedly compiled by the parents-to-be. Ms Mulroney's sons were also the page boys at the same royal wedding. Actor George Clooney and his lawyer wife Amal, also a human rights activist, are also being considered for the role of godparents to the baby of the Duke and Duchess of Sussex.

Girls day out.. #whoruletheworld @meghanmarkle @mubinarattonsey thank u for the kinda day I needed

Prince Harry's cousin Princess Eugenie and her husband Jack Brooksbank are also on the list of probable godparents to the new royal baby. The couple lives in the Kensington Palace. However, in an earlier report published in Express.co.uk, royal correspondent Robert Jobson said that the royals do not usually pick members from their family for godparent duty because they are "immediate relatives with a role in the baby's life anyway."

Priyanka Chopra and Meghan Markle met while the former was working on Quantico in the US and the latter starred in Suits. When the Kensington Palace issued a statement announcing Meghan Markle's pregnancy, Priyanka went on record to say: "I would, as a friend, just say that I'm really excited for her," reported People Magazine.

Priyanka also attended Meghan Markle and Prince Harry's wedding in May among with her other celebrity friends at the Windsor Castle. When Meghan Markle released her cookbook - her first independent project as a royal - Priyanka congratulated her on social media saying: "This is everything you always stood for. Women supporting women."

So proud of you for this new endeavour Meghan. This is everything you always stood for. Women supporting women. Supporting communities. Bringing Togetherness. Here you do it again.. Keep making the world smile babe!

Earlier, Priyanka wrote an essay on Meghan Markle when the Time Magazine included the latter in its list of 100 Most Influential People. "Meghan, standing shoulder to shoulder with Harry, will be a princess for the people," Priyanka wrote.

Priyanka Chopra recently married singer Nick Jonas and they are currently living in the US. Priyanka's upcoming projects are Hollywood film Isn't It Romantic? (releasing in February) and Bollywood project The Sky Is Pink, which she co-produces.