Priyanka Chopra Parties With Ranveer Singh After Returning From The US 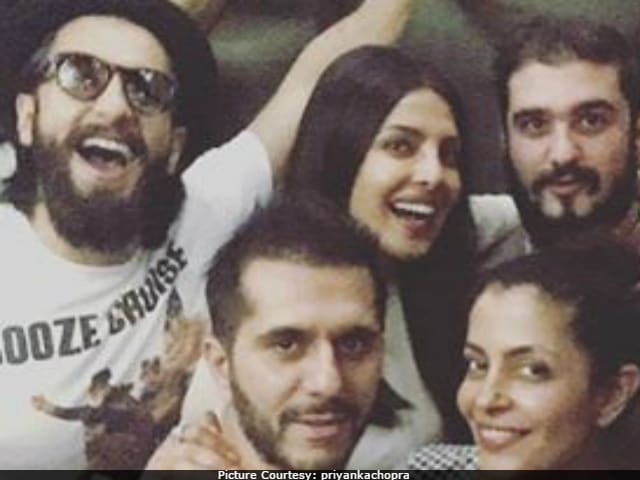 Priyanka Chopra and Ranveer Singh have acted together in three movies (Courtesy: priyankachopra)

New Delhi: Actress Priyanka Chopra, who returned from the US on April 22, partied with his Gunday co-star Ranveer Singh in Mumbai the same day. Priyanka, 34, has been residing in New York for the shooting of the second season of American TV series Quantico, in which she plays the protagonist Alex Parrish. Now, she has wrapped the shooting of Quantico season 2 and is back in India to catch up with friends, spend time with family. After her grand return on Saturday, she partied with friend and co-star Ranveer, filmmaker Zoya Akhtar, who directed her in Dil Dhadakne Do, directors Homi Adajania and Nitya Mehra and photographer Abheet Gidwani. The party was hosted by Priyanka's Dil Dhadakne Do producer Ritesh Sidhwani for the actress. Priyanka Chopra also posted a picture from inside the party, where she can be seen having a 'good time' with her friends.

Good times with good people. Thank u @ritesh_sid and dolly for hosting such a lovely evening for me. Much love Partner! @ranveersingh @homster @nityamehra19 #karan @abheetgidwani

Also, Ranveer Kapoor shared a picture from the party, where the actor can be seen posing with Priyanka and his Dil Dhadakne Do director Zoya Akhtar. A day before this, Ranveer was also spotted having a bash with actress Katrina Kaif at Zoya's residence.

Promoted
Listen to the latest songs, only on JioSaavn.com
Ranveer Singh and Priyanka have acted together in three movies namely, Gunday, Dil Dhadakne Do and Bajirao Mastani.

Priyanka Chopra, whose last Bollywood film was Jai Gangaajal, will decide on her upcoming Bollywood projects during her stay in India, reported news agency IANS. She will also reportedly wrap up work with her brand endorsements when in India. Next month, Priyanka will fly back to the US to promote her upcoming Hollywood debut movie Baywatch, co-starring Dwayne Johnson and Zac Efron. Baywatch is set to hit the theatres on May 10.