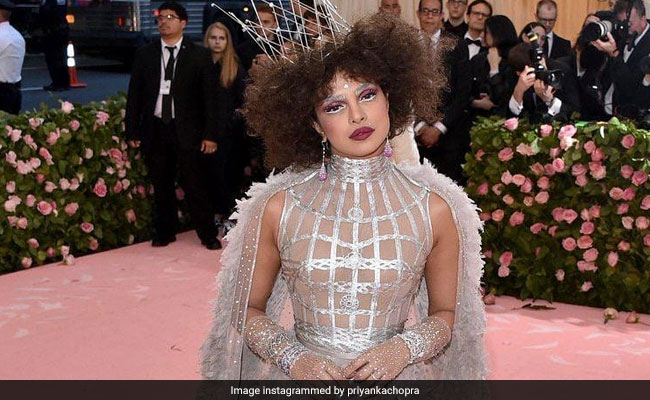 We bet you all have seen Priyanka Chopra's Met Gala look and loved it but have you seen the actress grooving to Madhuri Dixit's iconic song Choli Ke Peeche Kya Hai in her dramatic Met Gala outfit? If not, we are here to help. On Friday, fashion designer Prabal Gurung shared a BTS video from this year's Met Gala, in which Priyanka could be seen singing and grooving to Choli Ke Peeche Kya Hai from the 1993 film Khalnayak. In the video, Prabal asks the actress to sing a Hindi song. Now, Priyanka being the sport she is, says, "What's a Campy Hindi song? (hinting towards this year's Met Gala theme, which was "Camp: Notes on Fashion"). The Quantico actress even swirls her feathered cape in the video and her swag is just off the charts.

We can't thank Prabal Gurung enough for sharing this fun video. The designer shared the video on his Instagram profile and he captioned it: "This is how you do Met Gala Bollywood style. You all know I love Hindi films so much and any moment I can camp it out, I will."

Without much ado, take a look at the video here:

This is how you do #metgala #bollywood style. Y'all know I love Hindi films so much and any moment I can #camp it out, I will. Love these two @priyankachopra @_iiishmagish for indulging me xPG

Priyanka Chopra was a vision to behold in a feathered and thigh-high slit Dior outfit at this year's Met Gala. The actress accentuated her look with embellished gloves and stockings and dramatic make-up and the afro-curls definitely made her a head turner.

Priyanka was accompanied by her singer-husband Nick Jonas, who looked charming in a white Dior suit. He even sported a moustache. Priyanka and Nick just melted our hearts when they kissed at the red carpet. ICYMI, this is what we are talking about:

On the work front, Priyanka Chopra will next be seen in Shonali Bose's The Sky Is Pink, co-starring Farhan Akhtar and Zaira Wasim. Isn't It Romantic? remains Priyanka's last release.