Met Gala 2019: Priyanka Chopra And Nick Jonas 'Sneaked In' A Kiss At The Red Carpet

Met Gala 2019: Priyanka Chopra and Nick Jonas, why so adorable? 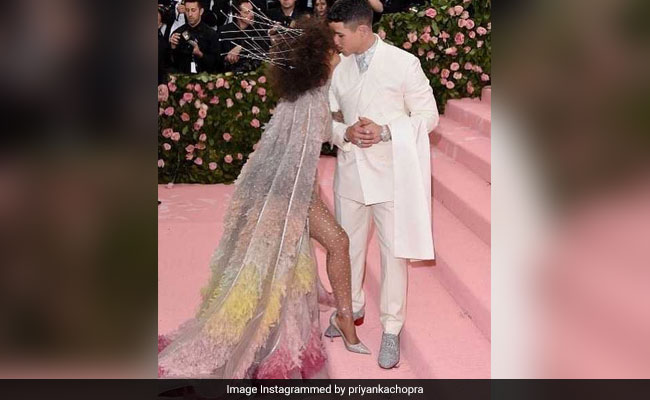 We just can't seem to get enough of Priyanka Chopra and Nick Jonas' PDA and the reason we brought this up today is because the star couple sneaked in a kiss at this year's Met Gala. Isn't that super cute! The couple never shies away from expressing their love publicly, be it on social media or even at the biggest of public events. On Tuesday, Priyanka gave her Instafam a sneak peek of her and Nick's PDA. In the picture, Priyanka can be seen kissing husband Nick Jonas at the Met Gala red carpet as they pose for the shutterbugs. "Sometimes you just have to sneak it in," read the caption on Priyaka's post. Needless to say, the picture went insanely viral on social media and it received over 8 lakh likes on Instagram within a few hours.

Without much ado, take a look at Priyanka Chopra's post here:

Priyanka Chopra and Nick Jonas walked hand-in-hand at The Metropolitan Museum Of Art and the couple ruled every second at the red carpet. Priyanka was a vision to behold in a feathered and thigh-high slit Dior outfit. The actress accentuated her look with embellished gloves and stockings and dramatic make-up. Not to mention the afro-curls. Nick Jonas also opted for a Dior outfit. The singer looked charming in a white Dior suit. This year's theme for the Met Gala is based on American author Susan Sontag's 1964 essay Notes On Camp and the theme of this year is called "Camp: Notes on Fashion" and Nick and Priyanka absolutely adhered to the theme.

Priyanka and Nick Jonas trended big time last week after they stole a kiss during the Billboard Music Awards wherein the Jonas Brothers performed. The video went crazy viral. Check it out here:

Priyanka Chopra and Nick Jonas, said to have met during the Met Gala in 2017, got married as per Hindu and Christian traditions in Jodhpur in December 2018.