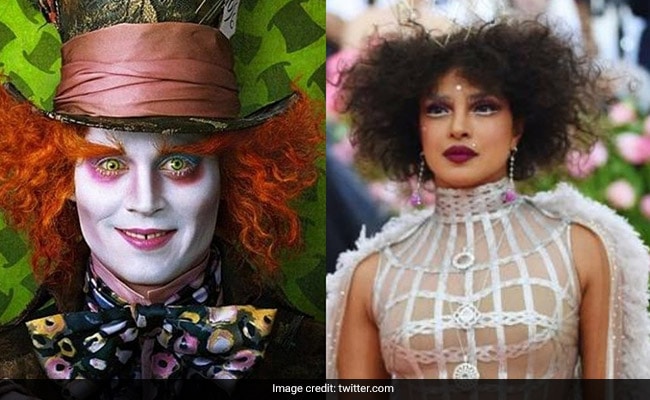 Actress Priyanka Chopra went to the Met Gala dressed in perfect compliance with this year's theme - 'camp', by which the Metropolitan Museum of Art meant anything from the shade card of 'irony, humour, parody, pastiche, artifice, theatricality, and exaggeration.' Priyanka's eye-catching Dior outfit, complete with futuristic makeup, outsize hair and even a bindi, deserves a slow clap and scored full marks with the fashion police for staying true to the theme. Twitter, however, has no respect for avant-garde fashion and you know what that means - memes. Priyanka Chopra is likely to be as entertained by the memes as the Internet was by her outfit so while we wait for her personal selection of the best of Twitter, here is a round up of what's out there.

More than her outfit, what actually got everyone talking about Priyanka's look was her eccentric make-up with exaggerated eye lashes and an afro-inspired hairdo. She placed a metallic cage crown of sorts in the midst of her afrocurls. While we are proud of Priyanka's fashion evolution at Hollywood galas, Twitter pointed out uncanny similarities between Priyanka's Met Gala look and Johnny Depp as The Mad Hatter in Alice In Wonderland. Priyanka Chopra walked the Met Gala pink carpet with husband Nick Jonas, who was also included in the meme fest.

Who would have thought Twitter would put these ROFL images of Priyanka Chopra and The Mad Hatter in our heads?

What kind of a weird 10 year challenge is this?? #METGala#PriyankaChopra#MetGala2019#METGala theme pic.twitter.com/spM0sOjftf

Priyanka and Nick Jonas' expressions were also explained like this:

And that inevitable Aadhaar Card meme had to happen:

Twitter thinks all you need to do to replicate Priyanka Chopra's Met Gala look is to just pop in a few Centre Shock lozenges:

Or use shock proof appliances:

Priyanka's hairdo also inspired some to drag in references about Sri Lankan cricketer Lasith Malinga and also even Sachin Tendulkar. So mean!

Who did it better ?
RT for Malinga
Like for Priyanka pic.twitter.com/XyjKaf1vQv

Sachin Tendulkar after riding a bike without helmet. #MetGalapic.twitter.com/LveUBOg95h

Some also thought Priyanka Chopra exemplifies what life in Mumbai locals look like:

Presenting to you #Missandei and #LordBaelish from @GameOfThrones
.

.#GoT fans would relate. #PriyankaChopra#NickJonas#NathalieEmmanuel#AidanGillen@priyankachopra@nickjonas@missnemmanuel@SeyiPeters_#GameOfThrones#TeamBaelish#LastOfTheStarks#Thronepic.twitter.com/nNHfdXfvGE