Nick and Priyanka sort of recreated the famous Romeo Juliet balcony scene but with a twist. 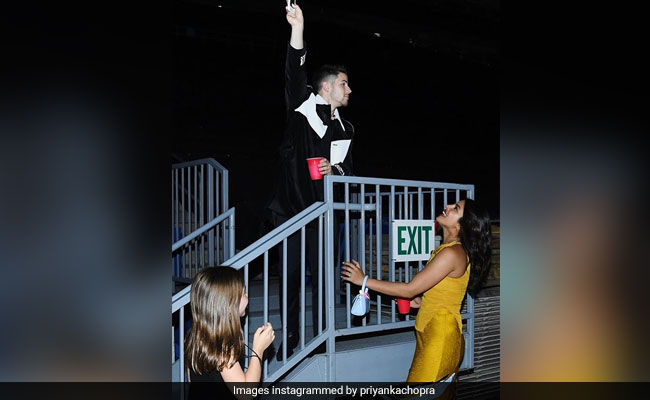 Priyanka Chopra and Nick Jonas had so much fun at the recently held iHeart Radio's Wango Tango concert on Sunday night in California! Nick, who was busy performing as part of The Jonas Brothers, sliced out time for a few goofy moments with wife Priyanka, which the actress shared on her Instagram. Nick and Priyanka sort of recreated the famous Romeo Juliet balcony scene but with a twist. The couple have a penchant for doing things differently and tradition was maintained in this case too - in case of Nick and Priyanka, it was a role reversal of sorts when the 'Romeo' (Nick) was spotted at a stairway landing, responding to the cheering crowd while Priyanka is cheering for Nick at the bottom of the staircase.

"Romeo oh Romeo... also Ava Drew," Priyanka captioned the picture, also making a special mention of who appears to be her little hang-out buddy for the night. Nick Jonas, who can be seen holding out his phone in the picture, turned the post into a possible meme with the comment: "When baes been on the gram too much." For the concert, Priyanka Chopra opted for a satin one-shouldered dress in sunshine yellow and accessorised with a blue bag keeping up with the tiny purse trend.

Fan spotted no only Priyanka at the concert but also Kevin Jonas' wife Danielle. However, Joe Jonas' wife Sophie Turner was missed.

#priyankachopra and #nickjonas at #wangotango. Are they a couple?

Priyanka Chopra recently trended a great deal over false speculation that she dropped by to visit Meghan Markle and Price Harry's son Archie. The actress put an end to all rumours with a tweet on Saturday.

While these are great gift ideas... this story is untrue, and I was actually in town for work. I hope whoever this "source" is starts checking their facts more often. https://t.co/S2sDlEiLaZ

In Bollywood, Priyanka Chopra will next be seen in Shonali Bose's The Sky Is Pink.