Prithviraj's Wife Supriya Misses This More Than Vacations With Him: "One More Week To Go" 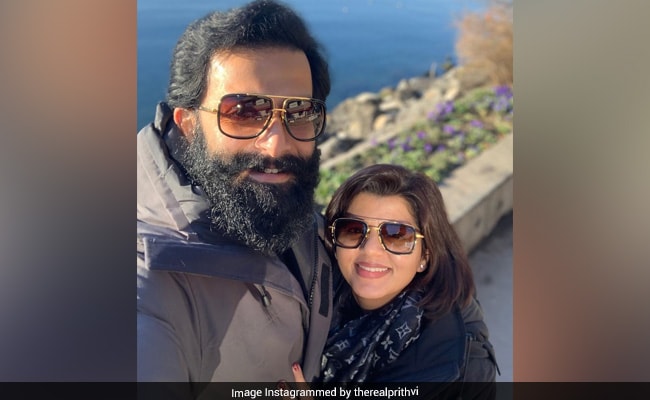 Prithviraj and Supriya, just like this forever (Courtesy therealprithvi)

South actor Prithviraj Sukumaran, who was stranded in Jordan for almost three months, landed in Kochi on May 22. After his homecoming, Prithviraj's wife Supriya said in a statement on Instagram that the actor will be in home quarantine for the next two weeks starting then. On Thursday, Supriya's comment on Prithviraj's Instagram revealed how eagerly she's waiting to spend time with her husband after the quarantine period is over. Supriya's comment was prompted by a throwback post from Prithviraj, who Instagrammed a memory from earlier this year. Sharing a photo of Supriya sitting in a car with a picturesque backdrop, Prithviraj wrote: "Throwback to our cross country drive in Jan 2020, Supriya! En route Mont Blanc, taking a break from the long hours behind the wheel at the Switzerland/France border. Had such different ideas about the year ahead back then! Hopefully, the world will come back to normal soon, and travellers and explorers will be back to doing what they love best!"

Throwback to our cross country drive in Jan 2020 @supriyamenonprithviraj ! Enroute Mont Blanc, taking a break from the long hours behind the wheel at the Switzerland/France border. Had such different ideas about the year ahead back then! Hopefully, the world will come back to normal soon, and travellers and explorers will be back to doing what they love best!

Here's what Supriya commented: "I miss those drives! But I miss seeing you! One more week to go I guess!" Aww. Prithviraj and Supriya, who got married in 2011, are parents to a daughter named Alankrita. In her statement earlier, Supriya had written: "Ally is thrilled her dada is back and hopes to see him after two weeks."

Meanwhile, here's what Prithviraj has been posting during his quarantine period:

Prithviraj, along with a 58-member crew, was stuck in Jordan's Wadi Rum desert. Prithviraj and the team had flown to the Arab country for the shooting schedule of his upcoming movie Aadujeevitham - permission to shoot in Jordan was revoked on March 27 because of the coronavirus outbreak. Prithviraj and his team flew back from Jordan as part of Vande Bharat Phase 2. The Indian Embassy in Jordan organised repatriation of 187 Indians from Jordan. On the day of his homecoming, the actor had posted this: