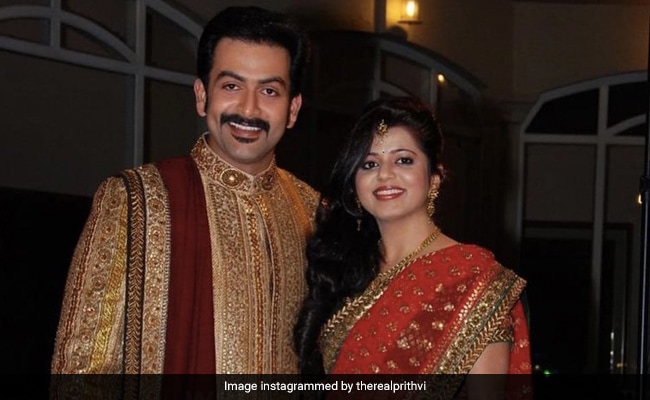 Prithviraj Sukumaran is celebrating his 10th wedding anniversary with wife Supriya Menon today. On Sunday, Prithviraj took us back to his wedding reception in 2011 and posted a throwback picture from the occasion on Instagram. In the picture, newly-weds Prithviraj and Supriya can be seen posing as groom and bride. Both of them look beautiful in their traditional wedding outfits. The actor also wrote a loved-up post for Supriya on the occasion. In his caption, he shared that his wife Supriya "deserves a medal" for being with him for the last 10 years.

He wrote, "10 years. Not everyone is lucky enough to find a best friend, soulmate and partner all in the same person. We've celebrated together when the whole world was cheering, and we've held hands when it seemed like the whole world was trying to pull us down."

"...Mother to my wonderful child, and the strength that's held me together, this woman deserves a medal for having put up with me for the last 10 years! I love you Sups! To the next 10 and forever!" the actor added.

Prithviraj's wife Supriya dropped a comment on his post. She wrote, "Finally the truth is out there! Haha! I love you too!"

Actress Rashi Khanna, who will be seen opposite Prithviraj Sukumaran in an upcoming Malayalam film Bhramam this year, also reacted to it. She dropped a red heart emoji in the comment section.

Malayalam actor Prithviraj Sukumaran married Supriya Menon, a journalist in 2011. The couple threw a lavish reception party for their family and friends the same year. Pictures of their reception party went viral on the Internet back then. The couple welcomed their daughter Alankrita Menon Prithviraj in 2014.

In terms of work, Prithviraj Sukumaran was last seen in Ayyappanum Koshiyum a film that released in 2020. The actor now has movies such as Kuruthi, Star, Jana Gana Mana, Bhramam and Aadujeevitham coming up this year. He will also be seen in Kaduva and Barroz: Guardian of D'Gama's Treasure in 2022.

What Pooja Hegde Tweeted After Fans Respond To Covid-Positive Update