"Salt and Pepper...with a whole lot of sugar," wrote the actor 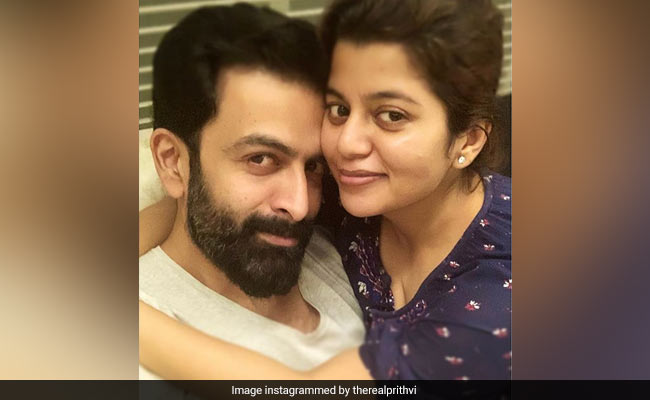 South star Prithviraj Sukumaran's latest post on Instagram will give you major couple goals. The 37-year-old actor, on Friday, shared an adorable photo of himself and his wife Supriya and immediately grabbed the attention of his Instafam with his super-adorable caption. "Salt and Pepper...with a whole lot of sugar," wrote Prithviraj and added a heart emoji. In the picture, the actor can be seen wearing a white t-shirt and clicking a selfie while his wife can be seen hugging him. Prithviraj's fans showered a whole lot of love on his latest picture by dropping heart emojis in the comments section. Check out the actor's post here:

On Supriya's birthday last month, Prithviraj Sukumaran shared a beautiful picture of his wife and wished her with these words: "Happy birthday partner! Ain't no battle too big with you by my side." Aren't they the cutest?

Happy birthday partner! Ain't no battle too big with you by my side

Prithviraj was stuck in Jordan's Wadi Rum desert for over three months before he returned to India on May 22. He was filming Aadujeevitham in the Arab country. The actor, after arriving in India, frequently shared updates about his quarantine life with his fans on social media. Take a look:

In terms of work, Prithviraj Sukumaran has acted in several blockbusters such as Stop Violence, Nandanam, Classmates, Puthiya Mukham, Ayalum Njanum Thammil and Celluloid among many others. In 2011, his film Indian Rupee won the National Film Award for the Best Feature Film. His last film was Driving License. Prithviraj will next be seen in Malayalam film Aadujeevitham.