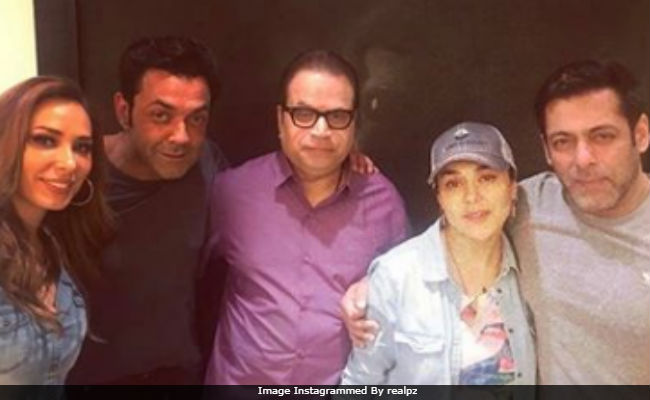 New Delhi: Actress Preity Zinta, who turned 43 today (January 31), celebrated her birthday last night with Salman Khan, Iulia Vantur (his rumoured girlfriend), Bobby Deol, Sonakshi Sinha, film producer Ramesh Taurani and other friends. Preity posted a picture collage from last night's celebrations and wrote, "Thank you all for all the wonderful birthday wishes. So humbled and so touched by all the good wishes. Loads of love!" adding hashtags like "Unplanned Get Together" and "Friends Forever." Salman Khan and Bobby Deol are currently filming Ramesh Taurani's Race 3, directed by Remo D'Souza. Preity has worked with both Salman and Bobby Deol previously.

Here's the picture which she posted.

Thank you all for all the wonderful birthday wishes So humbled and so touched by all the good wishes Loads of love ! Muaah #aboutlastnight #unplannedgettogether #friendsforever !

Bobby Deol was Preity's co-star in Soldier and Heroes. And, about a decade later, the duo starred together in Jhoom Barabar Jhoom. She has also worked with Bobby's actor brother Sunny Deol in Farz and The Hero: Love Story of a Spy. Preity will now feature in a special dance sequence in Sunny Deol's forthcoming film Bhaiyyaji Superhitt.

OMG ! Can you believe it - #19yearsofSoldier ! Thank you @theabbasmustan & @iambobbydeol for all the love, support & madness #Soldier #Memories

Promoted
Listen to the latest songs, only on JioSaavn.com
Preity Zinta's Instagram account has several pictures of the actress with Iulia Vantur, a Romanian TV presenter. She recently made her singing debut.

Wow stunned by how beautifully my darling @vanturiulia has sung this song - https://m.youtube.com/watch?v=jOQR9Sdk9KY Sooooo proud of you babe U & Manish have rocked it #harjai #loveit #amazing #song #wow