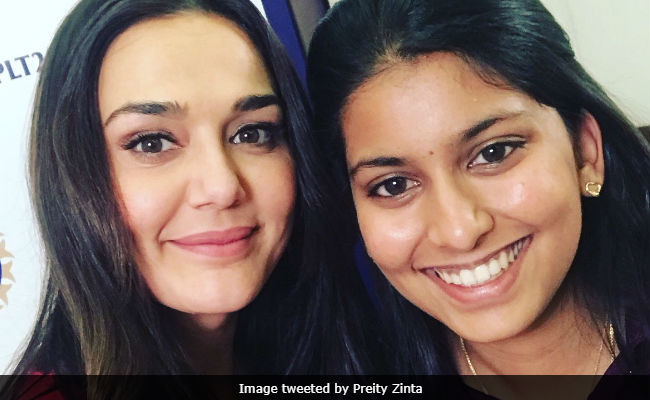 New Delhi: Juhi Chawla's daughter Jahnavi, who was apparently the youngest person to ever be at the Indian Premier League (IPL) auction table, gave actress Preity Zinta 'a run for her money' at the IPL auction over the weekend. Juhi Chawla co-owns IPL team Kolkata Knight Riders (KKR) while Preity is the owner of Kings XI Punjab. Jahnavi, who is all of 17, apparently helped making decisions for KKR which unsettled Preity's strategy because of which the actress tweeted: "It's awesome to meet the super smart Jahnavi Mehta who gave me a run for our money. #smartgirlsrock." Juhi Chawla replied: "You're a sweetheart. Bright, beautiful and a bundle of joy. Thank you, for being so kind to Jahnavi."

Forget the madness of the #VivoIPLAuction- it's awesome to meet the super smart Janvi Mehta who gave me a run for our money#smartgirlsrockpic.twitter.com/fi0bnHddVC

You're a sweetheart! Bright, beautiful and a bundle of joy! Thank you for being so kind to Jahnavi https://t.co/N87Z7qscAJ

In a post shared by Kolkata Knight Rider's verified Twitter handle, Jahnavi can be seen engrossed in the decision making process with the team's data analyst AR Srikkanth, head coach Jacques Kallis, KKR CEO Venky Mysore and her father Jay Mehta. Jahnavi was included in the group of "masterminds behind planning and building" KKR squad.

Here's another photo of Jahnavi from the two-day event, dressed in KKR team shirt, seated Venky Mysore, who is also the CEO of SRK's Red Chillies Entertainment.

At the @IPL auction , @KKRiders CEO @VenkyMysore with my daughter Jahnavi & our team so far #IPLAuction#IPL2018pic.twitter.com/cdKLtwWXDH

Promoted
Listen to the latest songs, only on JioSaavn.com
Juhi Chawla married business man Jay Mehta in 1995 and they are parents to Jahnavi and 14-year-old Arjun. As of now, it seems Jahnavi is interested to follow her father's footsteps. Jahnavi, who was a school (Dhirubhai Ambani International School in Mumbai) topper, will reportedly complete her higher education in London.

Can't believe my brilliant little girl ..!!!! so proud of her

Juhi Chawla was last seen in Bollywood film Chalk n Duster and then in web-series, titled The Test Case